Did You Know? Facts, Figures & Folklore about Chanukah the Jewish Festival of Lights

Did you know that Chanukah is referred to as the Festival of Lights? 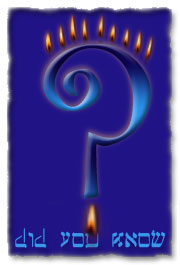 Chanukah begins four days before the new moon, which is the darkest night of the month. Kislev, the month in which Chanukah takes place, is also close to the winter solstice, which is the longest — and darkest — month of the year. The only ritual associated with Chanukah is lighting the candles on the chanukiah. Like many other faiths, the Jewish holiday of Chanukah brings light into the darkest time of the year.

Did you know that Chanukah is one of the least religiously significant holidays in the Jewish calendar?
The principle holidays of the Jewish faith include Rosh Hashanah, Yom Kippur, Sukkot, Passover and Shavuot. Due to its proximity to Christmas, however, Chanukah has taken on greater prominence in the last century.

Did you know that giving gifts is not a tradition historically associated with Chanukah?
Again, the proximity to Christmas has rubbed off on Chanukah celebrations — commercially speaking, at least.

Did you know that Chanukah is a holiday that celebrates national and religious freedom?
The story of Chanukah dates back more than 2,000 years ago, when the Jewish people of Judaea were being ruled by a brutal Greek king named Antiochus. The Jewish people rose up against the king, restoring their Temple, removing the Greek idols and returning to the practice of their monotheistic faith.

Did you know theChanukah story is not written about in the Torah?
The principle event of the holiday, the battle between the Maccabees and the Greeks, is post-Biblical. It happened several hundred years after the Torah is believed to have been given to the Jewish people on Mount Sinai.

Did you know that the word Chanukah means “dedication“?
Referring to the restoration of the Temple by the Maccabees after they defeated the Greeks? Unlike the monotheistic Jews, the Greeks practiced a pagan faith and had filled the Holy Temple with numerous idols.

Did you know that a menorah is actually a candelabra with six branches?
So, when someone says that they are going to light their Chanukah menorah, they are technically mistaken. The eight-branched candelabra that is lit on Chanukah is correctly known as a chanukiah.

Did you know that the many chanukiahs have nine candle holders
There are eight equally spaced holders for each of the eight days of Chanukah, along with a ninth holder for the helper candle, called the Shamash. The Shamash holder is typically separated from the other eight — either higher up or off to the side. The role of the Shamash is to light each of the other candles.

Did you know that the number of branches on the chanukiah is connected to a miracle said to have happened when the Maccabees restored the Temple?
The Jews cleaned up their Temple, fixed the broken alter and removed all the Greek idols. Then, they went to light the eternal lamp to rededicate the Temple. There was only enough oil to last for one night, and the process of refining more oil would have taken a long time. Miraculously, however, the oil burned through eight nights.

Did you know the Chanukah lights are placed from left to right in the chanukiah, but are lit from right to left?
This topic was extensively debated thousands of years ago by the Jewish sages, who ultimately decided on this order of things. Since then, every Jew has lit his or her chanukiah in the same manner.

Did you know that Jewish law commands every Jewish person to light his or her own chanukiah?
This is why families will often own multiple chanukiot (plural), with simple, wooden ones being used for younger children. Once all the chanukiot are lit, families recite a special prayer and sing songs about the brave Maccabees.

Did you know that many Jews have the tradition of placing their lit chanukiah in a window, so that the twinkling lights may be seen by people walking (or driving) by?
This tradition is intended to “illuminate” — or remind people about — the miracle that happened on Chanukah.

Did you know that the chanukiah is supposed to be lit at nightfall, except on the Sabbath, when the candles are lit immediately before sunset so that the Sabbath candles may be lit afterwards?
The Chanukah lights are supposed to remain illuminated for at least thirty minutes after dark. Olive oil was originally used to light the chanukiah, but today many families opt for the less expensive option of brightly colored candles. These special Chanukah candles are designed to burn for 40 minutes.

Did you know that the heroes of the Chanukah story are known as the Hasmoneans or, more commonly, as the Maccabees?
They were a rebel army led by four brothers, the sons of Mattathias the Cohen, a Jew from the priestly class.

Did you know that the term Maccabee comes from the Hebrew word for hammer?
Legend tells that the Maccabees struck a hammer-like blow against their Grecian enemies.

Did you know that there is a tradition to eat oily foods on Chanukah as a gastronomical reminder of the miracle of the oil that lasted for eight days?
In Israel, the food of choice is a deep-fried jelly donut. In North America and Europe, latkes — fried potato pancakes — are commonly enjoyed.

Did you know that a game of chance known as dreidle — or sivivon in Hebrew — is played on Chanukah?
The dreidle is a four-sided top, which is passed around and spun by each of 2 to 4 players. The letter that the top lands on determines how much of the pot of pennies (or chocolate coins) one wins or loses.

Did you know that there are as many ways to spell the holiday of Chanukah as there are days in the festival?
The numerous spellings derive from the fact that the English term is a transliteration of a Hebrew word. Whether you spell is Chanukka, Hanukah, Hanukka, or even Khanuka, rest assured it’s all the same holiday.