Every holiday has its traditional foods and Chanukah is no exception. Certainly not the most heart- 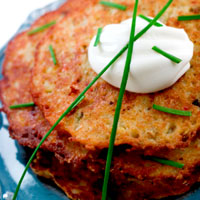 healthy of holidays, however, the Jewish festival of Chanukah features foods fried in oil.

Why the focus on artery-clogging foods? The oil is said to remind its eaters of the miracle of Chanukah. The short version of the oily miracle goes like this: When the Maccabees defeated the Greeks and rededicated their Holy Temple, they found enough oil to light the eternal lamp for only one day. Instead, the oil lasted for eight days. (To read more, see The Story of Chanukah or Who Were the Maccabees?)

In America and Europe, the traditional oil-laden food served on Chanukah is the latke. Latkes are potato pancakes, which are made by dropping a mixture of grated potatoes, onions, eggs and flour (or matzah meal) into a pan of bubbling oil. Crispy on the outside and tender on the inside, latkes are typically served with sour cream or with homemade applesauce.

In Israel, the traditional Chanukah food is sufganiyot (donuts). Unlike American-style donuts, sufganiyot do not have a hole in the center. Instead, they are deep fried, filled with strawberry or raspberry jelly, caramel cream or even chocolate spread, and sprinkled with powdered sugar. Most sufganiyot have 500-700 calories per donut.

To make your own latkes or sufganiyot, see our Chanukah recipe section. Yum!