Who Were The Maccabees?

The tenacious, deeply faithful Judah Maccabee and his band of four brothers are the heroes of the 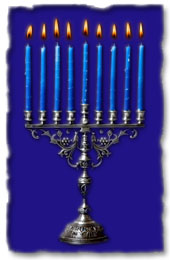 Chanukah story. But who was this fivesome and how do they come to lead the Jewish people to national and religious freedom during the 2nd century BCE?

Their story began when a Greek ruler tried to forces Mattathias, a Jew from the priestly class, to offer a sacrifice to a pagan god. Not only did Mattathias refuse, he murdered the Greek official. The Greek king Antiochus launched a series of reprisals, including desecrating the Holy Temple in Jerusalem by filling it with statues of Greek gods. Mattathias and his five sons rose up against these actions and fought for Jewish liberation of Judea.

Mattathias’ sons can to be known as the Maccabees, which comes from the root of the Hebrew word for “hammer” since the band of insurgents were said to strike hammer-like blows against their enemies.

The patriarch Mattathias was killed shortly after the fighting against the Greeks began. His son Judas (also known as Judah) took over as the leader of the rebels as is credited with great tactical ability and unparalleled bravery. By the end of the war against the Greeks, the only brother to have survived was Shimon (Simon).

The heroes of the Chanukah story, the Macccabees, more commonly known as the Hasmoneans, were guided by their fierce and steadfast belief in G-d. In fact, Jewish sources credit the Maccabees’ faith for their tenacity in driving out the Greeks from Judea. Immediately upon their victory, the Maccabees rededicated the Holy Temple in Jerusalem, which had been desecrated by the polytheistic Greeks during their rule of the city.

In the longer-term, the Maccabees’ victory preserved the right of Jews to practice their monotheistic faith and reestablished the national independence of the Jewish people in Judea for one hundred years, until 63 BCE.

1892, Laws Governing the Great Camp of the Knights of the Maccabees for Michigan