A Historical Perspective of Chanukah 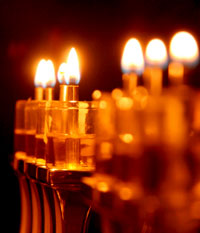 Chanukah is the wintertime Jewish Festival of Lights, a holiday that celebrates religious freedom and national independence. The story of Chanukah dates back more than 2,000 year ago, to the land of Judea, where the Jewish people were being ruled by Greek kings. One particularly brutal king was Antiochus, who forced the Jews to turn their backs on their monotheistic faith and worship instead the Greek gods.

Antiochus forbade the Jews from practicing their customs and forced them to convert to paganism. In the Jews’ Holy Temple in Jerusalem, Antiochus erected an idol of the Greek god Zeus and placed it on the holiest alter.

Antiochus’ religious oppression evoked the indignation of all the Jewish people, and most especially of Judah Maccabee, a Jew who was living in foothills surrounding Jerusalem. Judah Maccabee banned together with his brothers to form a resistance militia that fought Antiochus’ oppression and paganism. They were known as the Maccabees.

The story of Chanukah, as retold in the Book of Maccabees, is replete with miraculous battles won by the vastly outnumbered Maccabees, strengthened only by their unwavering tenacity and faith in G-d. After three years of brutal fighting, the Maccabbees, against all odds, drove the Greco-Syrians out of Judea. They reclaimed their Holy Temple in Jerusalem, which had been defiled with the statues of Zeus and other Greek gods.

On the 25th day of the Jewish month of Kisleve, 164 BCE, the Maccabees finished cleaning out the Temple and wanted to rededicate this holy structure by relighting the Temple’s menorah. Tradition teaches that there was only enough pure oil to burn for one night, but a miracle occurred and the Menorah burned for eight nights, at which point, more oil had been pressed and purified.

Thanks to this eight-day miracle, the Jewish people today celebrate an eight-day Festival of Light called Chanukah. In fact, the word Chanukah means dedication or consecration, evoking the Maccabees decision to rededicate the Temple and experiencing the miracle of the long-lasting oil.

Even today, in the depths of the dark winter, Chanukah reminds people of the illuminating light that comes from their faith in G-d and from singular dedication to religious freedom. The holiday’s over-arching themes of national independence also make Chanukah a particularly popular holiday in Israel, the modern-day national homeland for the Jewish people. In fact, many sports teams and one of the country’s major health insurance carriers are all named after the Maccabees!