The night before Christmas has as many unique traditions as it does people who celebrate it. Marking 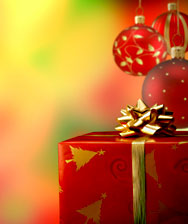 the end of the Advent Season, Christmas Eve is on December 24th. Here is a look at some of the more popular and prevalent Christmas Eve traditions.

Throughout Europe and in many last-minute American homes, too, families gather to set up their Christmas tree. They also hang garlands of evergreen boughs over the window and wreaths on the doors.

Bayberry candles were first made by the colonists, who discovered that, even though they take longer to make, they burned longer and cleaner than traditional wax candles. Because these candles took so much effort to make, many families began saving them for special occasions. Thus was born the tradition of lighting bayberry candles on Christmas, and reciting the verse: “Bayberry candles burned to the socket, puts luck in the home, food in the larder, and gold in the pocket.”

The Feast of Seven Fishes originated in southern Italy and is practiced today by many Italian American families.

In celebration of the birth of baby Jesus, many Roman Catholics do not eat meat on Christmas Eve. Instead, a feast of seafood and shellfish is prepared. Why seven different types of fishes? Tradition tells that it is because God took seven days to create the universe.

Many Roman Catholics and Anglicans celebrate Midnight Mass on Christmas Eve. In Spanish-speaking areas, the Midnight Mass is called Misa del Gallo (“Rooster’s Mass”). In Lutheran churches, German and Scandinavian traditions are often practices, such as nativity plays, called “Krippenspiele”, and midnight candlelight services. Other Protestant churches also have nativity plays and candlelight services, but usually hold them earlier in the evening. Many Methodist churches celebrate Holy Communion in a solemn service lit only by the candles of the Lord’s Table.

In Eastern Christian, the traditional Julian calendar is followed, in which Christmas falls 13 days after the modern Gregorian calendar. A Nativity feast is held, often in the church, followed by an all-night vigil.

An old European custom of singing Christmas songs throughout the village is still commonly practiced in the United States. Carolers, groups of friends or church-goers, will go from door to door, entertaining neighbors with traditional songs and hymns. Residents often give the carolers hot cocoa in return.