While the tradition of kissing under the mistletoe is a long-standing and Christmas tradition, the 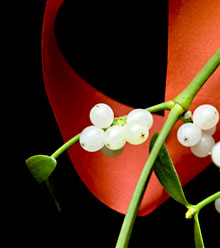 mistletoe plant itself is anything but romantic.

A parasitic plant that grows on trees along the eastern coast of North America, mistletoe was believed to have been spread through bird droppings. In fact, the word “mistel” is an Anglo-Saxon word meaning “dung” and “toe” means “twin”. So mistletoe quite literally means “dung on a twig.”

If that image doesn’t make you want to pucker up, consider this: Mistletoe has also long been believed to carry magical powers. The Druids believed that mistletoe, which also grows on oak trees throughout Europe, represented the tree’s soul and sexual prowess. The mistletoe would be gathered mid-summer and mid-winter and used to decorate one’s home. During the Middle Ages, mistletoe branches were hung to protect homes from evil spirits. Northern Europeans believed that mistletoe could help ward off witches.

In fact, during the festival of Saturnalia, the ancient Greeks would kiss under the mistletoe, which later became customary during marriage rites as well.

The tradition of kissing under the mistletoe on Christmas emerged in Europe during the Middle Ages. The original custom held that each time a man kissed a woman under a twig of mistletoe, he should remove one of the berries. Once all the berries were gone, no more kissing could take place under that twig.

Lladró porcelain Art By Lladro. Kiss Kids Under The Mistletoe