There are as many Christmas traditions as there are families that celebrate this festive Christian winter holiday. Here is look at some of the most popular traditions and the folklore behind them. 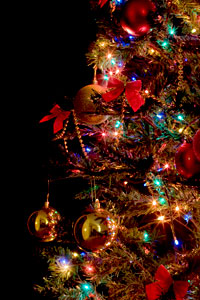 angels and bright colored ornaments. The legend of the Christmas tree can be traced back to the early 8th century, when an English missionary named Saint Boniface interrupted a group of pagan men about to cut down an oak tree to be used for a human sacrifice. In felling the tree, Saint Boniface revealed beneath it a young fir tree. He told the pagans that this sapling, with its branches pointing upward toward Heaven, represented the Holy child.

The legend of Saint Boniface was codified in 1539, when the records of the Cathedral of Strasbourg mention erecting a Christmas tree. During the later half of the 16th century, other churches began erecting Christmas trees — small fir trees decorated with apples, dates, nuts, and other sweet treats. By the 17th century, the tradition had migrated into people’s homes. Today more than 30 million live Christmas trees are sold in America each year.

Poinsettias, with their ruby-colored, star-shaped leaves, are ubiquitous holiday decorations during the Christmas season.More info…

Advent wreaths and calendars are an old Protestant custom, which originated in Eastern Germany. More info…

While the tradition of kissing under the mistletoe is a long-standing and Christmas tradition, the mistletoe plant itself is anything but romantic. More info…

The tradition of sending Christmas card greetings to friends and family dates back to the Victorian period in England. More info…