A beautifully decorated evergreen tree, with colored lights ablaze inspires in many warm memories of 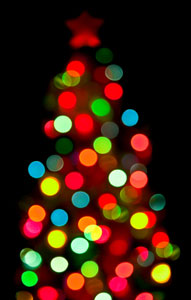 Christmases long past. The Christmas tree has become one of the most beloved and well know holiday symbols.

The tradition of a holiday tree has been around since ancient times and has played an important part in winter celebrations for many centuries. Many pagan festivals used trees when honoring their gods and spirits. In Northern Europe the Vikings considered the evergreen a symbol and reminder that the darkness and cold of winter would end and the green of spring would return. The Druids of ancient England and France decorated oak trees with fruit and candles to honor their gods of harvests. At the festival Saturnalia the Romans decorated trees with trinkets and candles.

There have also been many legends surrounding the lore of the Christmas tree. In one story Saint Boniface, an English monk, came upon a group of pagans who had gathered around an oak tree and were preparing to sacrifice a child. To stop the sacrifice and save the child, the Saint flattened the oak tree with one blow of his fist. A small fir sprang up in its place, which Saint Boniface told the pagans was the Tree of Life and represented the life of Christ.

Another legend tells of Martin Luther, the founder of the Protestant religion, walking through the woods late one night. As it was clear, many stars were shining through the branches of the trees giving the impression of twinkling lights. Luther was so inspired by the beauty of the sight that he cut down a small evergreen and brought it home. He recreated the stars by putting candles on the tree’s branches.

The use of a Christmas tree indoors appears to have begun in Germany. German Christians would bring trees into their homes to decorate. In some areas evergreen trees were scarce so the families would build a Christmas pyramid, simple wooden structures which they decorated with branches and candles.

The tradition of the Christmas tree eventually spread through out Europe. The English Royalty help popularize the tree in England by decorating the first Christmas tree at Windsor Castle in 1841. Prince Albert, husband of Queen Victoria, decorated the first English Christmas Tree with candles, candies, fruits, and gingerbread.

Early Christmas trees were often decorated with apples, nuts, cookies, colored popcorn and candles. The invention of electricity in the early 20th century and use of electrical Christmas lights helped spread the use of the Christmas tree.

It is now common in most communities through out the US to feature public displays of Christmas trees. Every year the President of the United States lights the National Christmas Tree in Washington and in New York skaters spin beneath the lighted tree of Rockefeller Center. Through Europe and the rest of the world the Christmas tree has also become readily accepted and adored.

Lights, ornaments and garland all bring Christmas cheer, so spread the joy of the season with a Christmas Tree Christmas Cards.