Celebrating Christmas Around the World

Christmas is celebrated by Christians around the world. With Christmas celebrations occurring in nearly 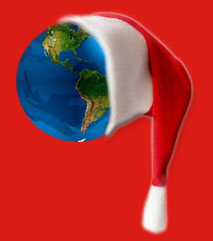 every country on the globe, there are many commonalities — and even more unique twists. Here is a look at how Christmas is celebrated in different countries and cultures.

In Russia, most Christians practice the Orthodox faith, in which Christmas is celebrated on the 6th of January. For 39 days, starting on the 1st of December, Russians will say special prayers and some even fast until Christmas. To celebrate Christmas Eve, the Russian Orthodox partake in a grand 12-course meal honoring each of the twelve Apostles. Traditional foods include fish, beet soup, stuffed cabbage, and stewed dry fruit.

Instead of Santa Claus, Russian children believe that the Babushka brings them presents. Legend has it that Babushka, whose name means grandmother, had planned to travel with the wise men to meet the Baby Jesus; she decided against it, however, because of inclement weather. She regretted it ever since and that’s why she visits children until today.

Christmas in The Netherlands (Holland)

In The Netherlands, Christmas comes a bit earlier than in North America! On December 5th, Dutch children and their families celebrate St. Nicholas Eve, when the legendary Sinterklaas Avond is believed to bring gifts to well-behaved children. After this joyful, present-filled day, the country turns its attention to preparing for the religious festival of Christmas on December 25th and the Three Kings Day on January 6th.

Celebrations in England are quite similar to those in the United States, with preparations for the December 25th holiday consuming most of the month of December. The highlight of Christmas Eve dinner is the traditional Christmas pudding. Legend tells that the pudding must be made by the 25th Sunday after the Trinity, and that it must be prepared with 13 ingredients, representing Jesus and his twelve disciples. Before cooking the pudding, the chef drops a silver coin into the mixture, which is believed to bring wealth and happiness to whomever receives it in his portion.

Decorating the Christmas tree has been a tradition in England since at least 1841, when Prince Albert set up a decorated tree in Windsor Castle.

Stockings are also hung by Christmas Eve so that Father Christmas can stuff them with goodies.

In England, children set out brandy and mince pie for Father Christmas, along with a carrot and bowl of water for the reindeer. At 3pm on Christmas Day, families gather around their telly (television) for the Queen’s Christmas address to the nation.

In Germany, Christmas celebrations start on December 5th, when St. Nicholas makes his rounds bringing gifts for the children. (Of course, the naughty ones just get coal!) The trees, known as Tannenbaums, were originally decorated with open-flame candles. Today most Germans favor the safer electronic Christmas lights. The tradition of decorating a Christmas tree actually began in Germany. In fact, it was the German-born Prince Albert of England who introduced the custom to the British people. Another tradition that got its start in Germany is that of the Gingerbread House, which was popularized in the famous German folk story of Hansel and Gretel.

In Southern Hemisphere countries such as Australia, the only “white” seen on Christmas is probably the white caps at the ocean. Indeed, many Aussies spend Christmas day at the beach, enjoying a seaside barbie (that means barbeque, mate!). Christmas advertisements often show Santa arriving on a surfboard and donning red swimming trunks. Christmas Eve supper often features cold salads and meats, along with a fresh dessert of strawberries and cream.

For the Mexican people, Christmas celebrations are very much focused on the religious themes of the holiday. Most families attend midnight mass on Christmas Eve. Children also anticipate a visit from “el Ni-o Dios”, the Holy Child, who brings gifts to good little children. On January 6, “Reyes Magos” is celebrated when it is believed that the three wise men come to visit, also leaving gifts for the children — oftentimes in their shoes.

Instead of decorating Christmas trees — which tend to be very expensive in Mexico — poinsettias are often used to decorate Mexican homes. The poinsettia actually originated in Mexico. Pinatas filled with candies are also common Christmas decorations.

Christmas in the Phillipines

In the Phllipines, Christmas — or “Pasko” — celebrations begin on the 16th of December and run through the first Sunday of January, when the Feast of the Epiphany is celebrated. This three-week long celebration includes rituals such as the Simbang Gabi, a series of nine masses starting at dawn from December 16-24. Other traditions include the Christmas Lantern, a start-shape lantern used to decorate homes, offices, shops and street lamps; Christmas caroling; and the Noche Buena, a traditional Christmas eve feast featuring roasted pig and other delicacies.