The History of Day of the Dead

The Mexican holiday El Día de los Muertos, or Day of the Dead, is an opportunity for Mexicans to remember and pay tribute to their deceased loved ones. Celebrated between October 31st and 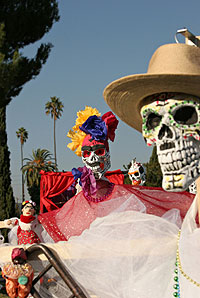 November 2nd, this holiday is similar to the American celebration of Halloween, with its themes of death and the spirit world. However, unlike the modern-day interpretation of Halloween, El Día de los Muertos is neither morbid nor gloomy. It is a festive remembrance of those who have departed.

The Day of the Dead has its origins of a number of different national and religious customs. In pre-Hispanic times, the Mexican people maintained deep and personal times with their dead. In fact, family members were often buried directly underneath their homes. When the colonizing Spaniards arrived, they brought with them their Catholic customs, including All Souls’ Day and All Saints’ Day. These Christian practices link back to Samhein, the ancient Celtic holiday that honored the transition of the dead from this world to the spirit world.

The Mexican people eventually blended their strong spiritual ties to the dead with the influencing Catholic holidays of All Souls’ and All Saint’s Day.

The Mexicans believe that during the Day of the Dead, spirits return to Earth for the day to be with their families. Little angel (angelitos) spirits arrive on October 31st at midnight and stay for 24 hours. Adults come the next day and stay through November 2.

According to Bobbi Salinas, author of Indo-Hispanic Folk Art Traditions, Day of the Dead “is a uniquely Indo-Hispanic custom that demonstrates [a] strong sense of love and respect for one’s ancestors; celebrates the continuance of life, family relationships, community solidarity and even finds humor after death — all positive concepts!”