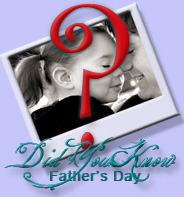 The third Sunday in June is America’s special day to celebrate our fathers. Here are some of the facts about our country’s dads that you may not have known:

Did you know that the concept of Father’s Day was first proposed in 1909 by Washingtonian native Mrs. John B. Dodd? Her inspiration for the holiday was to honor her own father, William Smart, a Civil War veteran and single dad, widowed when his wife died in childbirth with their sixth child.

Did you know that Mrs. Dodd’s vision did not become reality until 63 years later? In 1966, President Lyndon Johnson signed a presidential proclamation declaring the 3rd Sunday of June as Father’s Day.

Did you know that Americans aren’t the only ones to celebrate their dads? In the United States and over 50 other countries around the world, Father’s Day is celebrated on the third Sunday in June. The first Sunday in June is when Lithuanian dads are honored; and on the second Sunday, dads in Austria and Belgium have their special day.

Did you know that fatherhood is an experience that bonds men across generations, continents and life styles? For example, even world famous dad Brad Pitt suffers from the dreaded effects of sleep deprivation. “I love it,” he once said about fatherhood. “…and can’t recommend it any more highly – although sleep is nonexistent.”

Did you know that many child development experts believe the influence of a father on his children is most critical from the ages of six to 14? Former President George W. Bush, himself a father of two, agrees. As he wrote in the 2008 Presidential Proclamation for Father’s Day, “By providing their sons and daughters with a positive example, fathers help give their children the necessary foundation they need to make wise decisions throughout their lives.”

Did you know that since the 1950s, TV dads have wielded tremendous paternal influence over generations of American families? Some of the most popular fathers to grace our sets have included Ward Cleaver, Mike Brady, Howard Cunningham and Everybody Loves Raymond’s Ray Barone.

Did you know that there are 64.3 million fathers in America?

Did you know that in families where the mother works outside of the home, 14% of fathers are full-time stay-at-home dads?

Did you know that nearly a quarter of all married dads have three or more children living at home?

Did you know two-thirds of children under the age of six eat dinner with their dads every day?

Did you know that six out ten children under the age of six were praised at least three times a day by their fathers?

Did you know that one in twelve men serving in the US Army are dads?

Did you know that one in four dads who work outside the home spend less than an hour a day with their kids?

And did you know that 38% of working dads say they would take a pay cut to spend more time with their kids?

(source for figures: US Census Bureau)