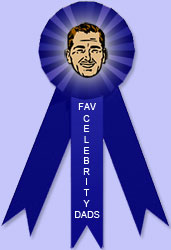 We know your dad is the leading man in your family’s life, but in Hollywood, Nashville and points in between, there is a growing crop of real super star dads. From musicians to athletes to actors, this list has five of the hottest celebrity pops in the business. And we’ve even got a genuine super hero dad.

Country music star Tim McGraw says he used to be selfish and cared only about his career. Then he met wife Faith Hill, become a dad to three daughters, Gracie, Maggie and Audrey, and gained a whole new perspective on life.

“You go through all those motions of being successful,” Tim told Oprah Winfrey. “Then you meet somebody to fall in love [with] and then you have children. The way you relate to everything-the way that your country’s going, the way that your world’s going, how your kids are being educated, what your kids are thinking, what influences they have on them, what you think about your God-all that stuff changes.”

Raising well-grounded kids is so important to Tim and Faith that they only tour during the summer: “With three kids, and school, and Girl Scouts, gymnastics and softball and basketball, that’s why we only tour in summer. The rest of the year we’re just taxi drivers with a credit card,” Tim quipped to the Charleston Daily Mail.

The country crooner says his career will always come second to his family, a sentiment he echoed during his Oprah appearance: “No matter which direction the world’s going, I know they’re going to get their focus at home. And that’s the best focus they can have.”

Tim McGraw’s last nine albums have all debuted at No. 1; twenty-six of his singles have hit No. 1 on the Country charts. To boot, Nashville’s favorite dad has won 3 Grammy’s and 21 Country Music Awards.

He’s got athletic prowess, international celebrity, and an even more famous wife. Not to mention three gorgeous boys, who are growing into little men in the glare of the Hollywood spotlight. No, he’s not a movie star or a TV mogul. He’s the midfielder for the Los Angeles Galaxy soccer team, David Beckham (currently injured, but on-loan to the Italian team AC Milan).

With all his winning goals and millions in endorsements, it’s easy to imagine that a superstar like Beckham would be rather self-absorbed. And he was, he says, until having children. Now that he’s a father, things are different. Beckham and wife — former Spice Girl Victoria nee-Adams — have three sons: Brooklyn (born 4 months before Posh and Beckham’s July 1999 wedding), Romeo (born September, 2002) and Cruz (born February 2005).

“I was selfish before,” said Beckham recently about the time before Brooklyn’s birth, but goes on to acknowledges that he was hardly unique in that respect. “…Everyone is,” he continued: “Until you have children you don’t realize how much it changes your life and how they become your main priority in terms of making sure they are OK, making sure they are happy. Me and Victoria are busy in our jobs and what we do as individuals. But there is nothing that compares to being a father. They are the most special boys in our lives and we would do anything for them.”

With Beckham’s youngest child already 5, the famous fielder isn’t content to close the baby chapter in his life just yet. Both David and wife Victoria are reportedly desperate to have another baby — a sister for their three boys. “I really want more kids and I hope it happens soon. I want a little girl. That would be amazing,” he is quoted as saying.

He’s played Red Pollard in Seabiscuit and Homer Wells in Cider House Rules, but say Tobey Maguire’s name and everyone thinks about just one role: Spiderman. Interesting, then, that in real life, Tobey is much more like Spidey’s alter-ego Peter Parker than the web-slinging super hero.

Tobey is known for being extremely private, unassuming and modest – especially for a guy reportedly earning close to $20 million a picture. Perhaps that’s because it hasn’t always been accolades and action figures for Tobey Maguire.

Born to an unmarried teenage mom, Tobey spent much of his childhood being bounced around the West Coat, from one relative’s house to the next: “I realized at a young age that I was responsible for myself. My feelings of love or security or happiness – they were all in my own hands.”

All that changed in 2003 when Tobey met his now wife Jen Meyer, jewelry designer and daughter of Universal Studios President and CEO Ron Meyer. In November 2006, the couple welcomed their daughter Ruby Sweetheart, and in September 2007, they married at an intimate, private ceremony in Hawaii. In May 2009, the couple expanded their family with the birth of their son, Otis Tobias.

Imagine waking up one day to discover that your mom is dating the hottest new teen idol – the same one whose face is splashed across your Teen People magazine. That’s about what happened for Rumer, Scout and Tallulah, Demi Moore’s teenage daughters with ex-husband Bruce Willis.

In 2003, Demi started dating heartthrob Ashton Kutcher and in 2005, the two were married in a private ceremony. In attendance were Demi’s daughters – and their dad. By all accounts, Bruce and Demi have remained close friends and are committed to co-parenting for the betterment of their daughter.

While many raised an eyebrow about the May-December couple (Demi is Ashton’s senior by 16 years), the Dude, Where’s My Car? Star has more than stepped up to the plate: “There is not a human being I could love more than those girls and their mom. If I had a daughter that was of my blood, I wouldn’t love that child any more. I feel like I have three kids, and we’ll see whether we’re given another child,” Ashton told Parade Magazine.

Having started his career as a model, Ashton shot to fame as the too-sexy-for-himself loafer on That 70s Show and has earned some big screen success in movies like The Butterfly Effect and What Happens in Vegas. Despite his pretty boy image, though, Ashton believes in the value of physical labor and sees it as an important part of raising kids – in this case, his step-daughters.

“I don’t think anybody should be allowed to grow up without doing some physical, blue-collar labor at some point,” said Ashton. “I had Rumer work on a construction site with my dad for a while and Scout just went to Guatemala working for Habitat For Humanity and helped build a house. ”

Despite the fact that the Jolie-Pitts have become their very own version of the Brady Bunch (as Angie’s costar Jack Black joked in the Today Show interview), our love for Brad as Dad dates back to the start of his relationship with Angie. Soon after hooking up with his Mr. & Mrs. Smith costar, Brad adopted her then 1-year old son Maddox (born 2001, adopted January 2006), whom Angie had adopted from Cambodia.

According to Brad, he couldn’t be happier with his full house: “I love it and can’t recommend it any more highly – although sleep is nonexistent,” he quipped at a recent press conference. It would take a lot more than sleep deprivation to slow down a humanitarian heartthrob like Brad Pitt.

When the Today Show’s Ann Curry recently asked Brad about his motivation for contributing to humanitarian projects, the Missouri-native replied passionately: “I’ve got kids now. It changes your perspective on the world. I’ve had my day – I’ve made some films. I’ve really had a very fortunate life. It’s time for me to share that now.”