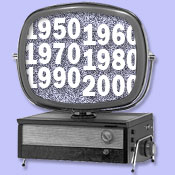 This Father’s Day, America will celebrate its 64.3 million dads. While you’re busy appreciating your own dear old dad, there are a few other pops you might want to keep in mind, too: TV dads. They may not be real, but these dads have wielded tremendous paternal influence over generations of American families.

Played by Hugh Beaumont, Ward Cleaver was the model of fatherly patience on the hit sitcom Leave It To Beaver (1957-1963). No matter what calamity son Beaver embroiled himself in – and there were some doozies, Ward was always ready with an encouraging word and some life wisdom.

Ben Cartwright, played by Lorne Greene, was the thrice-widowed patriarch in the long-running Western series, Bonanza (1959-1971). A pillar of the community, Ben was also a solid family man, raising his three dissimilar sons on the family’s 1000-acre ranch, the Ponderosa. At the core of the show was Ben’s commitment to helping his sons to face life with strength and integrity.

Andy Taylor (played by Andy Griffith) was one of TV’s first single dads on The Andy Griffith Show (1960-1968). The down-home sheriff for the town of Mayberry, North Carolina, Andy set about raising his son Opie with a bit of hokey humor and a heaping of soliloquy-style discipline – and the help of the ever-present Aunt Bee.

Archie Bunker (played by Carroll O’Connor) was TV’s most morally offensive character – long before being morally offensive was popular. A working class father from Queens, Archie sat in his striped armchair, dispensing his always loud, usually bigoted opinions about people and politics. Pivotal to the show were Archie’s daily spars with son-in-law Michael (AKA “Meathead”), whose liberal views and perennial student status were fodder for Archie’s slurs.

TV’s first stepdad, Mike Brady (played by Robert Reed) was the widower patriarch whose new blended family included three sons (his) – and three daughters (wife Carol’s). The Brady Bunch (1969-1974) managed to face their weekly dose of overly dramatic family dilemmas with some firm discipline from Mike (and fresh baked cookies from Alice, the housekeeper). One of TV land’s strictest dads, Mike was also the most even-handed – not to mention the hippest (remember the perm?).

Ever-jolly Howard Cunningham (played by Tom Bosley) was the Midwestern TV Dad on the 1950s-style comedy Happy Days (1974-1984). Howard earned his living by running the hardware store, but always managed to find time to solve the woes of his teenage kids. And he even played surrogate dad to son Richie’s rather wayward collection of friends.

One of TV’s first African American fathers, Heathcliff Huxtable also broke paternal ground in The Cosby Show (1984-1993) for his dual-income earning family. The high-powered couple (Cliff was an OB-GYN, wife Clair a corporate attorney) resonated with American viewers, who were eager to see an image of their own family’s working status – rather than TV land’s persistence in the passé norm of the housewife mom. Together, the joke-cracking Cliff and straight-laced Clair raised their five kids, ranging in age from preschool to high school, in their Brooklyn brownstone.

Steven Keaton (played by Michael Gross) was the liberal, loving dad to three in Family Ties (1982-1989). Both Steven and wife Elyse were former flower children trying to reconcile their now suburban lifestyle with a soulful quest to “do good” in the world. Steven found an outlet for his altruism in his career – running the public TV station; but at home, this former hippy was constantly foiled by eldest son Alex “P.” Keaton, a hard-core Reagan Republican.

Dan Connor (played by John Goodman) was the rotund, beer swigging, blue-collar husband and father on the comedy Roseanne (1988-1997). Frequently confounded by his three kids, Dan also struggled to figure out who really “wore the pants” in his blue-collar family: himself or his wise-cracking wife Roseanne.

Speaking of less-than-perfect dads, Homer Simpson has cornered the market on underachieving. As The Simpsons’s (1989-present) animated patriarch, Homer personifies bumbling ineptitude in everything he does – from his botched attempts at raising his three kids to his rather ironic job as safety inspector at the local nuclear plant. The longest run show on TV, with characters that have never aged, The Simpsons offers America a satirical, politically incorrect family and one of the most enduring iconic cultural references.

Tim Taylor (played by Tim Allen) was Home Improvement’s (1991-1999) goofy handyman and blundering father to three sons. Fortunately for the Tool Man – as Tim was called on his successful cable DIY show – he was able to count on his ever-patient wife Jill and his sage-like neighbor Wilson for guidance on everything from parenthood to politics.

Ray Barone (played by comedian Ray Romano) was the Italian-American, sportswriter dad to three on Everybody Loves Raymond (1996-2005). Set in Long Island, the show featured the complicated (some might say: dysfunctional) family dynamics between the dopey but well-intentioned Ray; his long-suffering wife Debra; his gruff but good-hearted father Frank; and his meddling, passive aggressive mother Marie. And many were the opportunities for conflict between them, since Ray and Debra lived right across the street from Frank and Marie.

Now here’s a killer dad! Anthony “Tony” Soprano (played by James Gandolfini) was no Ward Cleaver, but he’s definitely the most powerful dad on this list. The ruthless Underboss of a New Jersey crime family, Tony seemed to genuinely love his wife (if you can look past his rampant infidelity) and his two teenage kids. But between his depression and anxiety attacks (and borderline sociopath personality), Tony struggled to find his footing in fatherhood – or marriage and any other genuine relationship, for that matter.