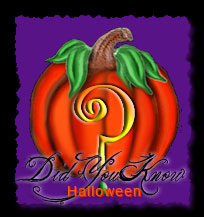 Did You Know?
Facts, Figures & Folklore About Halloween

The holiday of Halloween dates back to the Dark Ages. Once truly spooky traditions have morphed over the years into much more light-hearted (but still mischevious) celebrations. Here is a fun look at some of the facts and figures that describe how Americans will be enjoying All Hallows Eve this October 31st.

Did you know that the origins of Halloween are rooted in an ancient festival honoring the dead, known as Samhain (pronounced “Sow-ween”)?

The Celtic people, who lived 2,000 years ago in the United Kingdom and northern France, believed that during Samhain, the veil between this world and the spirit world was at its thinnest. Samhain was a two festival, starting on November 1st.

Did you know that Halloween is also linked to the Catholic Church’s celebration of All Saints Day?

When the Church began sending out missionaries to the Celtic region, it adopted many traditional rituals and sanctioned them as Catholic activities. In the 7th century, for example, the Church’s celebration of All Saints Day was moved to coincide with Samhain. A special mass called Allhallowmas was recited during All Saints Day, to honor any saints who did not already have a day of their own. The night before — October 31st — quickly became to be known as All Hallows Eve.

Did you know that the origins of “Trick’O’Treating” can be traced back to early celebrations of All Souls’ Day in Britain?

The poor would go from door-to-door, begging for so-called “soul cakes”. Over time, the custom changed and children became the beggars, receiving apples, sweet buns and money. The tradition migrated over the Atlantic Ocean and quickly became entrenched in American celebrations of Halloween.

Did you know that more than 36 million children are expected to go trick-or-treating this Halloween?

That’s how many 5-13 year olds there are in the United States. Of course, age is no limit for Halloween fun, so those numbers might be a bit of an understatement.

Did you know that there are 106 million households in the United States?

That’s a lot of trick-or-treating ground to cover in just one night.

Did you know that the states of Arizona, Nevada, Florida, North Carolina, Colorado and Georgia have all seen recent increases in their elementary-school aged population (in contrast to the rest of the country, which has witnessed a drop-off)?

If you live in one of these six states, be sure to stock up on candy sales, as you’re likely to see lots of trick-or-treaters this October 31st.

Did you know that if you have young children, Halloween is undoubtedly an important landmark in your fall holiday schedule?

From the costumes, to the crafts to the trick-or-treating, kids love Halloween. Why not capitalize on their affection by hosting your own Halloween bash? Here are some suggestions for how to make your kids’ Halloween party a spooktacularly good time!

Did you know that legends claim the “jack-o-lantern” got its name from a mean old man named Jack?

Legends have it that a stingy and mean old man, named Jack, was too mean to get into heaven when he died.

When Jack went to hell he was meet by the Devil who gave him a piece of burning coal and sent him away. Jack placed the burning coal in a turnip to use as a lantern to light his way. The legends claim that Jack is still walking with the “jack-o-lantern” looking for a place to stay

Did you know that another Jack-O-Lantern legend tells the story of the early Celts who would carry a lantern when they walked on the eve of October 31st?

Did you know that the United States produces more than 998 million pounds of pumpkins?

That’s a lot of Jack-o-Lanterns to make! The largest producer is Illinois, which grows an average of 457 million pounds of pumpkin. All these pumpkins are valued at more than $100 million.

Did You Know that for some, Halloween conjures up images of sweet children dressed as kitty cats, innocently Trick-or-Treating as they tote a plastic pumpkin full of sugary treats?

However for others, Halloween is a dark and mysterious evening, filled with unspeakable horrors: Witches cauldrons, one-eyed monsters and ghoulish ghosts.

If your Halloween tastes run toward the more sinister, then you’ll definitely want to check out our spook-tacular list of America’s (unlucky) thirteen most terrifying haunted houses.

Did you know that Arizona has a town named Tombstone?

Now that sounds like a spook-tacular place to spend Halloween.

Did you know that the average American consumes 25 pounds of candy each year?

Now how much of those 25 pounds do you think gets eaten on Halloween?

Did you know that October 30th is Candy Corn Day?

Candy corn is one of the most popular Halloween treats.

Did you know that more than 35 million pounds of candy corn will be manufactured this year?

That’s equal to some 9 billion pieces of corn, enough to circle the moon 21 times if laid out end-to-end.

Did you know that one serving of candy corn contains 140 calories and no grams of fat?

Did you know that the tradition of dressing up in costumes on Halloween dates back to Celtic times?

On Samhain, Celtic people would dress up in animal costumes to mark the end of summer and coming of winter. This custom was later adopted by Christians who celebrated All Souls’ Day by dressing up as saints, angels and fairies. Today, of course, the most popular costume choices for Halloween are comic book heroes and Disney princesses!

Did you know that there are more than 2,500 costume rental shops across the country?

If rental isn’t for you, consider some more frugal options: making a costume at home with materials you already have on hand or check out garage sales and your local Craigslist for costume sales.

Did you know that October is Black Cat Month?

These sweet felines have been long maligned. In fact, many humane societies are so worried about mistreatmet of the black cat on Halloween that they don’t allow anyone any black cat adoptions during the entire month of October.

Did you know that modern day Wiccans still celebrate Samhain with elaborate rituals marking the end of summer and coming of the winter?

While there are many ways to celebrate Samhain, most rituals are focused on honoring one’s deceased ancestors or commemorating the cycle of death and rebirth.