Dressing Up & Trick-or-Treating on Halloween 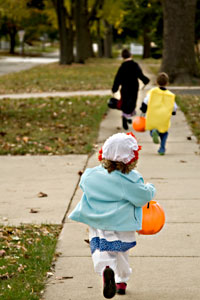 While modern-day Halloween is not a pagan holiday, the traditions of this October 31st holiday are most definitely rooted in the ancient Celtic holiday of Samhain. Wearing costumes, for example, dates back to the Celtic tradition of dressing up in animal costumes to mark the end of summer and the coming of winter.

The custom of wearing costumes was later adopted by Christians in their celebration of All Souls Day (November 2nd). Rather than dressing like animals, however, Church-goers wore costumes of saints, angels, devils and fairies as a nod to the hallowed spirits honored on All Souls Day.

The popular custom of trick-or-treating also has its roots in Celtic tradition. During the Celtic period, the November 1st holiday of Samhain was considered a time to honor the dead. The souls of those who had died in the past year transitioned on Samhain from this world to the spirit world. To aid their deceased ancestors on their journey, the Celtic people would leave out food for the spirits to eat before their long journey.

Over the centuries, Samhain revelers began the custom of dressing up as spirits and performing antics in exchange for food – a tradition that came to be known as mumming, the custom that inspired trick-or-treating as we know it today.