“Eye of newt, and toe of frog, Wool of bat, and tongue of dog”

“For a charm of powerful trouble, Like a hell-broth boil and babble” 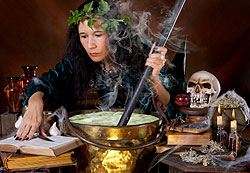 Witches and Warlocks have had a long history with Halloween. Legends tell of witches gathering twice a year when the seasons changed, on April 30 – the eve of May Day and the other was on the eve of October 31 – All Hallow’s Eve.

The witches would gather on these nights, arriving on broomsticks, to celebrate a party hosted by the devil. Superstitions told of witches casting spells on unsuspecting people, transform themselves into different forms and causing other magical mischief.

It was said that to meet a witch you had to put your clothes on wrong side out and you had to walk backwards on Halloween night. Then at midnight you would see a witch.

When the early settlers came to America, they brought along their belief in witches. In American the legends of witches spread and mixed with the beliefs of others, the Native Americans – who also believed in witches, and then later with the black magic beliefs of the African slaves.

The black cat has long been associated with witches. Many superstitions have evolved about cats. It was believed that witches could change into cats. Some people also believed that cats were the spirits of the dead.

One of the best known superstitions is that of the black cat. If a black cat was to cross your path you would have to turn around and go back because many people believe if you continued bad luck would strike you.