Rosh Hashana is the Jewish New Year, a time for soul-searching and repentance as well as a season for celebration. The complexity of this pinnacle Jewish holiday is reflected in the multitude of 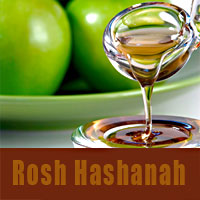 symbolic foods eaten at the Rosh Hashana table. Here is a look at some of those foods and the meaning behind each one:

Challah is a sweet, braided bread, traditionally eaten every Shabbat (Sabbath) and holiday. On Rosh Hashanah, the braid challah is formed into a circle, representing the circle of life and the continuity of the Jewish year. Raisins are often added to make the challah extra sweet (see honey below for an explanation of sweet foods on Rosh Hashana.)

On Rosh Hashanah, it is customary to eat sweet foods, as an omen of the sweetness for the coming year. One way in which honey is eaten is as a dip for the challah. During the rest of the year, challah is usually sprinkled with salt; on Rosh Hashana, challah is dipped into honey. Beyond using honey on challah and apples (see below), many homes also serve honey cake for dessert or use honey in savory recipes for chicken and other dishes.

Apples are the quintessential Rosh Hashanah symbol. In addition to being a seasonal fruit, apples are also a sweet fruit. At the start of the festive Rosh Hashanah meals, a plate of apples and dish of honey is passed around. Each person takes on apple and some honey for dipping. Before eating the apple, a special prayer is said, asking G-d to bless them with a sweet near year — as sweet as the food they are about to eat. Like the honey, apples are not only a symbolic food partaken at the beginning of the meal, but are also featured prominently in the Rosh Hashana menu. Apple cake is a common dessert, as are baked apples and apple tarts.

Apples are traditionally eaten on the first night of Rosh Hashana; on the second night of this two-day holiday, Jews partake in a diffeent seasonal fruit — one which has not be eaten yet this season. When doing so, a special blessing is recited known as the Shehechiyanu. The Shehechiyanu prayer thanks G-d for bringing us into this new season, commemorated by eating a new fruit. The tradition of eating a new seasonal fruit also connects the Jewish people to the agricultural calendar and reminds them to appreciate the fruits of the earth.

One of the most common new fruits is a pomegranate, which comes into season in Israel in the late summer/early fall. The pomegranate is said to have 613 seeds, which is the same number of mitzvot — or commandments — proscribed in the Bible. When eating the pomegranate, a special blessing is said beseeching G-d to make the Jewish people as fruitful as the seeds of the pomegranate.

A symbol of abundance and fertility, fish heads are a traditional Rosh Hashanah food representing the “head” of the New Year. When eaten, a special prayer is recited invoking G-d to make the Jews as fruitful and multiple as the fish in the sea.

Less common than round challah, apples, honey or even fish heads, fenugreek is traditionally eaten on Rosh Hashanah by Jewish people of Middle Eastern descent. The tradition likely started since the Hebrew word for fenugreek sounds similar to the Hebrew word for “increase”. When eating the fenugreek, a special prayer is recited asking G-d to increase our merits.

There are a handful of foods traditionally eaten during Rosh Hashanah that are intended invoke G-d’s protection of the Jewish people from their enemies. Leeks, beets and dates all fit this category.