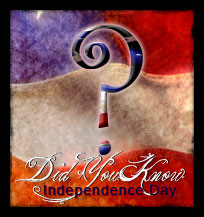 On July 4th, America’s independence will be celebrated in grand fashion with parades, fireworks and backyard BBQs. Did you know that in 2009, Americans will commemorate the 233rd anniversary of the approval of the Declaration of Independence by the Continental Congress — the act that set the 13 American colonies on their road to national sovereignty. Here are some more facts and figures about America and our Independence Day celebration:

01) Did you know…
that Independence Day is one of ten federal holidays?

that of the original thirteen colonies that attended the Continental Congress and voted on the Declaration of Independence, only nine voted in favor of it?

Pennsylvania and South Carolina voted against the Declaration, while New York abstained.

03) Did you know…
that on the first Independence Day, commemorating the signing of the Declaration of Independence by the Continental Congress on July 4, 1776, in Philadelphia, Pennsylvania, the US had consisted of 13 colonies under the rule of England’s King George III?

At the time, there were approximately 2.5 million people living in those 13 colonies. This 4th of July, there will more than 304 million people in the United States.

04) Did you know…
that the first American flag was sewn by seamstress Betsy Ross in May 1777, at the behest of the Continental Congress?

The original version of the flag had thirteen stripes and thirteen stars, representing the original thirteen colonies that signed the Declaration of Independence.

And did you know that the vast majority of those flags — $4.3 million worth — were made in China?

06) Did you know…
that there are 31 cities in America with the word “eagle” — a national symbol of the United States — in their name, including Eagle Pass, Texas (population 26,401)?

08) Did you know…
there are nine places named “freedom,” including the most populous city on the list: Freedom, California (population 6,000 residents)?

09) Did you know…
there is one city named Patriot in America? It’s in Indiana. Population 192?

10) Did you know…
that the original Pledge of Allegiance was written in 1892 by Christian socialist, Francis Bellamy?

The original version did not include the words “under G-d”. They were added in the 1950s after the Knights of Columbus successfully campaigned to Congress. Bellamy’s granddaughter said he would have resented the change.

11) Did you know…
that more than 270 million Americans visit a national park every year?

The first national park was Yellowstone, designated as such in 1872 by President Ulysses S. Grant. Today, there are over 400 national parks, covering more than 84 million acres from Maine to California. Visiting one of these 400 parks is a great way to experience a true taste of America’s vast beauty and bounty.

12) Did you know…
that America’s second president John Adams was the first to light the fireworks spark for Independence Day when he said the holiday ought to be celebrated by pomp and parade — and illuminations from one end of this continent to the other”? Nothing says 4th of July like fireworks, so be sure to catch an awesome pyrotechnic display.