Did You Know? Facts, Figures & Folklore About Mardi Gras and Fat Tuesday Celebrations

Did you know that Mardi Gras celebrations date back to ancient Roman times?

The Romans’ Lupercalia festival was held in mid-February to honor the god of fertility and agriculture, Lupercus. The party had definite Mardi Gras-like qualities, 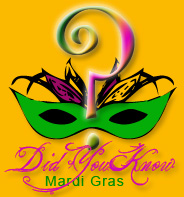 including drinking, feasting and “pleasures of the flesh”. During the Crusades, the carnival-like Lupercalia became adopted as a “last fling” of indulgence before the 40-day Lenten period of penitence.

Did you know that Mardi Gras is French for “Fat Tuesday”?

Some say the term alludes to the over-indulgences of the day. Others explain that the word “fat” refers to a fattened ox that was paraded through town before being sacrificed at a mid-winter, pagan fertility celebration.

Did you know that the last Tuesday before Lent developed a variety of different traditions depending on what country one was living in?

The one commonality was that all these traditions were indulgent! In English, for example, a feast of pancakes was served. In France, Mardi Gras — meaning “Fat Tuesday” — was especially indulgent, reminiscent of ancient Roman times.

Did you know that historians differ about how exactly Mardi Gras was brought to the United States, but all agree it was due to French influence in the territory of Louisiana?

Did you know that the term Carnival, often synonymous with Mardi Gras celebrations (and the name for the Brazilian pre-Lent bash) comes from a Latin expression meaning “farewell to the flesh”?

Interestingly, the New Orleans anthem for Mardi Gras is the song If Ever I Cease to Love.

Did you know that the first Mardi Gras paradewas staged in the United States 1837?

It has been reported that there was just one float, which, despite its crudeness, brought great joy to the people of New Orleans. Today, the city begins its cascade of parades the Friday before Ash Wednesday. The parades feature hundreds of different floats from the city’s many parishes, each of which is sponsored by a different Krewes, or club.

Did you know that the tradition of Krewes tossing out handouts to parade onlookers — or “throws” in New Orleans parlance — dates back to Renaissance Europe?

That’s where the festival custom started in which lords and ladies would hurl mead and ale at revelers. Some historians believe the tradition has even more ancient roots. Pagan peasants would toss grains at their fields in the springtime, as a show of gratitude to the deities for allowing them to survive the bitter winters.

Did you know that the ever-popular beaded necklaces, so ubiquitously associated with Mardi Gras today, didn’t come into play until the 1880s?

That’s when one of the Krewes dressed up a member as Santa Claus and had him toss out glass beads. It was such a hit that by 1900, beaded necklaces had become the Mardi Gras throw. Somewhere along the way, those lovely glass beads got replaced by cheap plastic and aluminum beads, which today earn the thrower a flash (of flesh). That particular “trading” tradition most likely dates back to the 1970s.

Did you know that purple, green and gold are the traditional colors of Mardi Gras?

Did you know that King Cakes are a traditional Mardi Gras food?

An oval cake honoring the three kings is decorated in purple, green and gold colors, representing justice, faith and power, respectively. A small plastic baby, symbolizing the Baby Jesus, is baked into each cake. Whoever gets the piece with the baby not only will have good luck that year, but will also be responsible for bringing the King Cake to next year’s party!