Did you know that in 2010, Martin Luther King, Jr. Day will be celebrated on Monday, January 18th? The theme of the holiday this year is Remember! Celebrate! 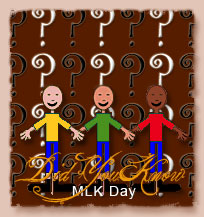 Did you know that the holiday commemorating Dr. Martin Luther King was signed into law 15 years after his death, by President Ronald Reagan? The bill had faced opposition by many in Congress, who argued against it on economic, cultural and national grounds. Ultimately, Dr. King’s spirit triumphed and the bill was signed into law on November 2, 1983. The first national celebration took place two and a half years later, on January 20, 1986.

Did you know that Dr. King and his wife, Coretta Scott King, traveled toIndia, the homeland of Mahatma Ghandi, in 1959? While there, Dr. King studied Ghandi’s principles, known as Satyagraha, and determined that he would use them as his primary instrument of social protest in the United States.

Did you know that Dr. King earned a Nobel Peace Prize in 1964 for having “contributed the most to the furtherance of peace among men.” The prize money — $54,000 — was divided by Dr. King among various civil rights organizations.

Did you know that Martin Luther King earned his PhD in 1954? While working toward his degree, Dr. King studied the writings of philosopher Henry David Thoreau. He was especially moved by Thoreau’s essay “Civil Disobedience,” which argued that peaceful revolution could be brought about by a critical mass of people following their conscience to disobey unjust laws.

Did you know that the night before Dr. King’s April 1968 assassination, he gave a speech to striking sanitation workers, in which he alluded almost prophetically to his own death: “I just want to do God’s will. And He’s allowed me to go up to the mountain. And I’ve looked over. And I’ve seen the promised land. I may not get there with you. But I want you to know tonight, that we, as a people will get to the promised land. And I’m not fearing any man.” The next day, as he was leaving his motel room, Dr. King was shot and killed.

Did you know that on April 4, 1968, Martin Luther King, Jr. was assassinated on the balcony of the Lorraine Motel in Memphis, Tennessee? The shot that rang out on the Memphis sky led to riots across the country and prompted many in the civil rights movement to adopt a change in their commitment to non-violence.

Did you know that in 1941 President Franklin D. Roosevelt signed an executive order banning discrimination by government defense contractors? This order marked the first time in history that the U.S. federal government acknowledged and acted against racial discrimination in hiring practices. It also marked the beginning of a series of national, state and grassroots actions, which changed the face of race relations in America forever.

Did you know that the first Freedom Ride took place in 1947? Organized by CORE, the Congress of Racial Equality, Freedom Riders were black passengers traveling on buses throughout the South as a test of the Supreme Court decision banning segregation on interstate travel. Also in 1947, Jackie Robinson became the first black major league athlete when he was hired by the Brooklyn Dodgers baseball team.

Did you know that in 1948 the U.S. Armed Forces was ordered by President Harry Truman to integrate all of its units? Until this order, the Armed Forces had maintained separate units for black and white soldiers. Also in 1948, the U.S. Supreme Court ruled that using race as a reason to bar persons from owning property was unconstitutional.

Did you know that in 1954, the U.S. Supreme Court ruled that racial discrimination in public schools was unconstitutional? In its landmark decision, Brown v. Board of Education, the Court ordered that black pupils be admitted to public schools with “all deliberate speed.” That order was not carried out for three more years.

Did you know that on December 1, 1955, a seamstress named Rosa Parksrefused to vacate her seat for a white man on a Montgomery, Alabama city bus? She was arrested — an event that would spark the boycott of the city’s segregated bus lines.

The bus boycott was a Herculean effort spearheaded by Martin Luther King, Jr. and participated in by the entire black community of Montgomery. After nearly twelve months, the boycott ended with an historic decision by the Supreme Court requiring the city to fully desegregate its municipal bus lines. King’s involvement in the boycott catapulted him onto the national stage, where for more than a decade he led the civil rights movement in non-violent protest.

Did you know that in 1957, President Dwight D. Eisenhower ordered federal troops to Little Rock, Arkansas to enforce the Supreme Court ruling of three years earlier, which had declared segregated schools as unconstitutional. The troops were assigned to protect the rights of nine black students attempting to attend Central High School.

Did you know that in 1960, the first sit-in of a lunch counter was launched by black college students from North Carolina Agricultural and Technical College? This form of non-violent protest quickly spread throughout the South.

Did you know that in 1961, President John F. Kennedy created the Committee on Equal Employment Opportunity? In that same year, the first black students were admitted to the University of Georgia.

Did you know that in 1962, civil rights organizers launched a massive voter registration campaign within the black community in Mississippi? The effort was largely unsuccessful, due to poll taxes and reading tests that were still in place in Mississippi and other Southern states to bar blacks from voting.

Also in 1962, James Meredith, a black college student from Mississippi, won his Supreme Court case to be granted admission to the University of Mississippi. Federal troops were sent by President Kennedy to protect Meredith and ensure his full enrollment.

Did you know that on June 12, 1963, Medgar Evers, a field secretary for the National Advancement of Colored People (NAACP), was shot in the back on his way home from a meeting. Evers was the first of many prominent civil rights activists assassinated by segregationists in the 1960s. Evers’ death motivated President Kennedy to call on Congress to pass a comprehensive civil-rights bill.

Did you know that in August, 1963, two months after Evers’ assassination, Martin Luther King Jr. led more than a quarter of a million people in the March on Washington for Civil Rights? The march culminated with King’s famous “I Have a Dream” oration.

Did you know that in November of that same year, President Kennedy was assassinated in Dallas, Texas, leaving the Civil Rights Movements in a state of shock and desperation?

Did you know that in 1964, President Johnson signed into law the nation’s first comprehensive Civil Rights Act, which President Kennedy had called for less than a year earlier? The Act made racial exclusion from public facilities such as restaurants and hotels illegal in all 50 states.

Did you know that in 1965, Congress passed the Voting Rights Act, which cleared the way for the massive registration of blacks in Alabama, Mississippi, Louisiana, Georgia and South Carolina? Within just two years, more than half of all eligible black voters in those states were registered.

Did you know that in 1967, the first black justice, Thurgood Marshall, was appointed to the Supreme Court? Also in that year, race riots erupted in major cities like Detroit, Michigan and Newark, New Jersey. Simultaneously, the cities of Cleveland, Ohio and Gary, Indiana elected their first black mayors.

Did you know that in 1971, the U.S. Supreme Court ruled that busing children outside their district in order to desegregate schools was constitutional? Many see this decision as the “bite” behind the “bark” of the 1954 Brown v. Board of Education ruling that found segregated public schools unconstitutional.

Did you know that in 1972, Congress passed the Equal Opportunity and Employment Act, which prohibited job discrimination on the basis of race, religion or gender? In 1974, the city of Detroit, Michigan created the first affirmative action hiring program in an attempt to balance the racial composition of its local police.