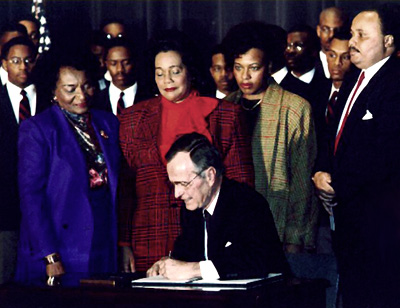 Each year on the third Monday of January schools, federal offices, post office and banks across America close as we celebrate the newest American national holiday.

But it was a tough time getting the bill passed.

First a bill had to be introduced by a member of the House of Representatives. The Speaker of the House assigned the bill to a committee where the bill was discussed in detail. Meetings were held where supporters and opposers could discuss their positions. The committee then agreed that bill should be sent to a vote. The Rules Committee scheduled a debate on the issue. The House of Representatives then voted on the bill. It passed the House with a vote of 338 to 90. Then it was sent to the Senate.

Again the issue of the King holiday had to pass through committees and public hearings before a final vote was taken.

There were many who opposed the idea of holiday for Dr. King. America had only honored two individuals with national holidays – George Washington and Christopher Columbus. Many felt that there were other Americans that deserved a national holiday, such as Abraham Lincoln and John F. Kennedy.

One barrier to the confirmation was the Senator from Georgia who had denounced Dr. King as a communist.

Others feared the King holiday was meant as a way to make up to African-Americans for slavery. Other feared the cost of the holiday, with the extra overtime paid to federal workers who had to work on the holiday as well as millions to those federal employees who were paid for the day.

Senator Bob Dole pointed out to those critics ‘”I suggest they hurry back to their pocket calculators and estimate the cost of 300 years of slavery, followed by a century or more of economic, political and social exclusion and discrimination“.

It took many years for Congress to decide to celebrate the holiday. In the years leading up to the official decree many African-Americans celebrated the birthday themselves with a few states declaring King’s birthday a state holiday. The bill was finally passed by both the House of Representatives and the Senate and was signed into law on November 2, 1983.

This year the King holiday will be celebrated on Monday January 16, 2012. The theme of this years holiday is:

Remember! Celebrate! Act! A Day On, Not A Day Off!!