The Story of The Rev. Dr. Martin Luther King, Jr

Martin Luther King, Jr. was born on January 15, 1929 in Atlanta Georgia. His father was the minister of the Ebenezer Baptist Church, as was his father before him. 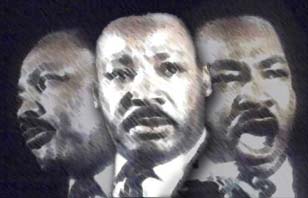 “M.L.,” as he was called, lived with his parents, his sister and brother in Atlanta Ga. Their home was not far from the church his father preached at.

M.L.’s mother and father taught their children what would become an important part of M.L.’s life – to treat all people with respect. Martin’s father worked hard to break down the barriers between the races. His father believed African-Americans should register their complaints by voting.

As M.L. grew up he found that not everyone followed his parents principles. He noticed that “black” people and white people where treated differently. He saw that he and his white friends could not drink from the same water fountains and could not use the same restrooms.

M.L.’s best friend as a child was a white boy and as children they played happily together. But when they reached school age the friends found that even though they lived in the same neighborhood, they could not go to the same school. M.L.’s friend would go to a school for white children only and M.L. was sent to a school for “black” children. After the first day of school M.L. and his friend were never allowed to play together again.

When M.L. was ready for college he decided to follow his father and become a minister. While attending the Crozer Theological seminary in Pennsylvania he became familiar with Mahatma Gandhi, who had struggled to free the people of India from British rule by “peaceful revolution”.

M.L. was also inspired by the work of Henry David Thoreau, particularly his essay called “Civil Disobedience.” It stated that if enough people would follow their conscience and disobey unjust laws, they could bring about a peaceful revolution.

It was also at college that M.L. met a young woman named Coretta Scott and they would eventually marry. In 1954 M.L. received his PhD. and accepted the job of pastor of the Dexter Avenue Baptist Church in Montgomery, Alabama.

Dr. King and the other African-American community leaders felt a protest was needed. The African-American residents of the city were asked to boycott the bus company by walking and driving instead. The United States Supreme Court would end the boycott, which lasted 381 days, by declaring that Alabama’s state and local laws requiring segregation on buses were illegal. The boycott was a success and Dr. King had showed that peaceful mass action could bring about change.

In January 1957 the Souther Christian Leadership Conference (SCLSC) was formed with Dr. King as their president. The following May 17, Dr. King would lead a mass march of 37,000 people to the front of the Lincoln Memorial in Washington, DC.

Dr. King had become the undisputed leader of the civil rights movement.

Partly in response to the march, on September 9, 1957, the US Congress created the Civil Rights Commission and the Civil Rights Division of the Department of Justice, an official body with the authority to investigate voting irregularities.

Dr. King and the SCLC organized drives for African-American voter registration, desegregation, and better education and housing throughout the South. Dr. King continued to speak. He went to many cities and towns. He was greeted by crowds of people who wanted to hear him speak. He said all people have the right to equal treatment under the law. Many people believed in these civil rights and worked hard for them.

Dr. King was asked constantly to speak. So in order to spend more time with his family he wrote his first book, Stride Toward Freedom which was a success. While signing copies of his book in Harlem, NY an African-American woman stepped forward and plunged a letter opener into Dr. King’s chest. Dr. King recovered from his wound and the woman was eventually declared insane.

In February 1959 Dr. and Mrs. King went to India, the homeland of Mahatma Ghandi. In India Dr. King studied Satyagraha, Gandhi’s principle of nonviolent persuasion. Dr. King was determined to use Satyagraha as his main instrument of social protest.

After his return to America, Dr. King returned home to Atlanta, Ga. where he shared the ministerial duties of the Ebenezer Baptist Church with his father. The move also brought Dr. King closer to the center of the growing civil rights movement.

In January 1963 Dr. King announced he and the Freedom Fighters would go to Birmingham to fight the segregation laws. An injunction was issued forbidding any demonstrations and Dr. King and the others were arrested.

Upon his release there were more peaceful demonstrations. The police retaliated with water hoses, tear gas and dogs. All this happened in the presence of television news cameras. It would be the first time the world would see the brutality that the southern African-Americans endured. The news coverage would help bring about changes as many Americans were disgusted and ashamed by the cruelty and hatred.

Continuing the fight for civil rights and to celebrate the 100th anniversary of the Emancipation Proclamation, on August 28, 1963 200,000 people gathered in the front to the Lincoln Memorial. It was a peaceful protest, made up of African-Americans and whites, young and old. Most had come to hear Dr. King deliver his famous “I have a dream” speech.

1964 would be a good year for Dr. King and the civil rights movement. Dr. King was nominated for the Nobel Peace Prize as someone who “had contributed the most to the furtherance of peace among men.” Dr. King would divide the prize money, $54,000, among various civil rights organizations.

President Lyndon Johnson signed the Civil Rights Act into law. It guaranteed that“No person in the United States shall, on the ground of race, color, or national origin, be excluded from participation in, be denied the benefits of, or be subjected to discrimination”.

In the winter of 1965 Dr. King lead a march from Selma, Alabama to the state capital in Montgomery to demand voting reforms. 600 marchers would begin the march but after 6 blocks the marchers were met by a wall of state troupers. When the troopers with clubs, whips and tear gas advanced on the marchers it was described “as a battle zone.” The marchers were driven back while on the sidewalks whites cheered. 2 ministers, 1 white and 1 African-American, were killed and over 70 were injured with 17 hospitalized. It was the most violent confrontation Dr. King had experienced.

A court order overturning the injunction against the march was issued and the marchers were allowed to proceed. When they arrived in Montgomery the marchers were greeted by 25,000 supporters singing ‘We Shall Overcome.” On August 6, 1965 a voting rights bill was passed allowing African-Americans to vote.

Dr. King believed that poverty caused much of the unrest in America. Not only poverty for African-Americans, but poor whites, Hispanics and Asians. Dr. King believed that the United States involvement in Vietnam was also a factor and that the war poisoned the atmosphere of the whole country and made the solution of local problems of human relations unrealistic.

Dr. King continued his campaign for world peace. He traveled across America to support and speak out about civil rights and the rights of the underprivileged.

In April 1968 Dr. King went to Memphis, Tennessee to help the sanitation workers who were on strike. On April 3rd Dr. King would give what would be his last speech:

“We’ve got some difficult days ahead. But it doesn’t matter with me now. Because I have been to the mountaintop. And I don’t mind.

Like anybody, I would like to live a long life. Longevity has its place. But I’m not concerned about that now.

I just want to do God’s will. And He’s allowed me to go up to the mountain. And I’ve looked over. And I’ve seen the promised land

I may not get there with you. But I want you to know tonight, that we, as a people will get to the promised land. And I’m not fearing any man.

The following day, April 4 1968, as he was leaving his motel room Dr. Martin Luther King, Jr. was shot and killed.