From celebrities to stay-at-home soccer moms, every woman with kids looks forward to that Sunday in May when she is the leading lady. Who wouldn’t want to be lavished with a little extra affection, appreciation and attention from the people that matter most in your life? Here’s a look at the Top 10 celebrity moms you’ll be sharing Mother’s Day with this year. Maybe you’ll recognize yourself in some of their most admirable qualities. 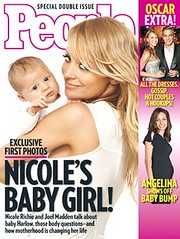 Until recently, Nicole Ritchie was known for little more than being Paris Hilton’s bosom bud and Lionel Ritchie’s daughter. Then the frighteningly thin 27-year old announced her pregnancy (the baby’s daddy is Joel Madden) and in less than a year, Nicole completely reinvented herself as a nurturing mother. Nicole started by gaining a healthy amount of weight during her pregnancy – the first sign that she had learned to put her baby’s needs before her own.

Throughout her pregnancy, Nicole and Joel sponsored a number of fundraising events for low-income mothers and children, and even kicked off their own foundation, the Richie Madden Children’s Foundation. Since the birth of her daughter Harlow in January 2008, Nicole has been nothing but the devoted mother. While it hasn’t been easy, the former Simple Life star is committed to making it work because “that’s what’s best for Harlow.” Way to turn it around, Nicole! 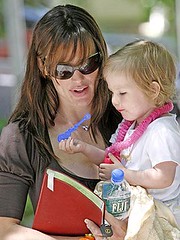 Of all the celebrity moms on this list, Jennifer is probably the most likely to pull up a seat next to you during the local library’s story hour and sing along – mercilessly out of tune – to Old McDonald Had A Farm. Even though motherhood is the great equalizer between celebrities and their adoring fans, there is no more relatable star and mom than Jennifer Garner.

Wife to Ben Affleck and mom to daughters Violet Anne, born in December 2005, and Seraphina Rose Elizabeth, born in January 2009, Jennifer is the ultimate down-to-earth mom. Unlike other A-listers, who put on heals and makeup even for a quick run to Starbucks, Jennifer is constantly snapped by paparazzi wearing jeans and sneakers, hair pulled back into a ponytail, and not even a hint of makeup. Jennifer would rather spend the day at the park with her girls than shopping on Rodeo Drive – and she’s clearly passing on these good values to her daughters. Now that’s something to celebrate!

Despite her pin-up image, however, Pam is a devoted mom to two sons, Dylan Jagger Lee, born on December 29, 1997, and Brandon Thomas Lee, born on June 5, 1996, both born at home. (Their father is ex-husband Tommy Lee.) In fact, the blond bombshell is a staunch — if unexpected — advocate for natural parenting.

The first among a growing trend of celebrity moms to birth her babies at home, Anderson also breastfed both of her kids – despite her DD-size implants. Ever the hands-on parent, Pamela has been a volunteer crossing guard for her children’s school and part-time room mother. Who would have thought that the ditzy blonde lifeguard would be such a stellar mom? 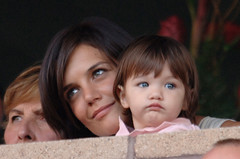 Katie – or Kate, as husband Tom Cruise has redubbed her – is mom to one of the most famous celebrity babes of all times: Suri Cruise. After Katie’s whirlwind romance with Tom and her super quick pregnancy, rumors began swirling about the authenticity of their claims of love — and even whether Tom was the baby’s real father.

Hysteria intensified after Suri’s birth on April 18, 2006 (the one-year anniversary of the couple’s first date), since Tom and Katie kept their little princess shielded from the paparazzi for weeks. When Hollywood’s most talked-about couple finally introduced Suri to the world, pictures of the gorgeous, blue-eyed baby girl squelched the gossip. Suri is the perfect genetic combination of both mom and dad.

Once the naïve girl next door on the WB series Dawson’s Creek, Katie Holmes Cruise is now one of Hollywood’s hottest fashion plates. From running the New York City marathon to walking the red carpet, Katie does it all with sophisticated style. Of course, her favorite person to accessorize is little Suri, whose shoe collection probably rivals that of the wife of a former South American dictator. 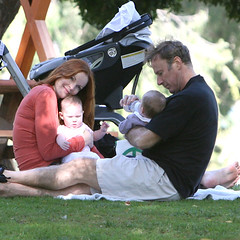 Desperate Housewives star Marcia Cross was desperate to get pregnant after her 2006 marriage to stockbroker Tom Mahoney. But already in her early 40s, Marcia felt like time was running out. The fiery red head spoke openly about her struggles to get pregnant, which made her announcement that she was expecting fraternal twins all the more exciting. Born on February 20, 2007, Savannah and Eden are now two busy little girls with a doting mom who loves to take them to the park. Way to go Marcia: desperate no more! 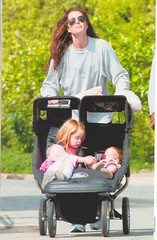 Former child star, model, comedian, author and actress, Brooke Shields also proudly wears the title of mom. The A-lister is also mommy to Rowan Francis, born May 2003 and Grier Hammon, born April 2006. After her first daughter was born, Shields battled a debilitating case of post-partum depression. Having recovered through therapy and anti-depressants, Brooke used her platform to spread the word about post-partum depression. Her book Down Came the Rain documents her struggle and triumph over PPD, which afflicts as many as one in five post-partum moms.

When Tom Cruise, came out against Brooke’s use of medication to treat depression (a position associated with his belief in Scientology), Shields fought back with a staunch Op-Ed piece in the New York Times about women and depression.

A former Princeton University ungrad, Brooke is bright and passionate – but she also values her friends, so she made up with Tom and even attended his 2006 wedding to Katie Holmes. Brooke makes the perfect role model to her girls – beauty, brains and compassion! 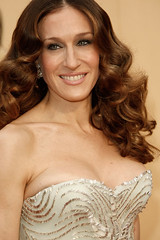 Star of the hit TV show and movies, Sex in the City and Sex in the City II, design entrepreneur, political activists and wife to Broadway actor Matthew Broderick, Sarah Jessica Parker seemingly does it all. Of course, the most important title she holds is that of mom to son James Wilke, born October, 2002, and twin daughters, Marion Loretta Elwell and Tabitha Hodge, born on June 22, 2009 via surrogate after years of infertility.

In a May 2010 interview with Vogue magazine, Parker reflected on the day her girls came home: “Meeting your children rather than giving birth to them, it’s as if, um, it’s — suspended animation. The gestational experience is gone. It’s as if everything else disappears for a moment, and the world goes silent and — I can’t explain it except to say that nothing else existed,” the 45-year old actress said. Despite playing spoiled diva Carrie Bradshaw on Sex, Parker says she is very hands-on when it comes to her family — in everything from making her children’s food to putting together their high chairs. (Source: Vogue magazine) 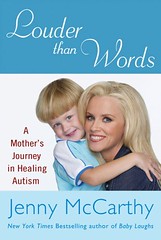 Once just another blond-haired babe on Baywatch, comedian and actress Jenny McCarthy has recently transitioned into one of the most important roles of her career: outspoken champion of children with autism. Just what motivated this huge change? Her son, Evan Joseph, born May, 2002.

The author of several books on pregnancy and motherhood – including Belly Laughs and Baby Laughs, Jenny recently tackled the serious subject of autism in her autobiographical book Louder Than Words. Since the book’s release in September 2007, Jenny has become an outspoken opponent of the childhood vaccination schedule set by the Center for Disease Control, calling it “one-size fits all”. She believes that vaccines contributed to her son’s autism. Today, one out of every 150 American children is diagnosed with autism – more than double the rate of just ten years ago. Autism is a spectrum disorder affecting neurological development. 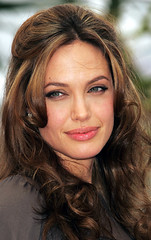 The 34-year old Angelina Jolie has traveled a long road to motherhood. But after a string of failed relationships, battles with depression and more tattoos than you can count, the award-winning actress is now the happy mom to her growing brood.

And if raising six children and being a major international super star wasn’t enough to keep her busy, Angelina is also the UN Goodwill Ambassador and international do-gooder, helping millions of children in crisis around the globe. No word on when the super star couple will have their next little one, but Angelina has said that she wants anywhere from seven to 14 kids! 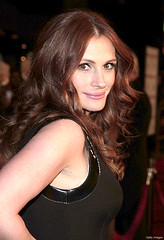 From Pretty Woman to mother to three, Julia Roberts can do it all. After her 2002 nuptials to cameraman Danny Moder, Julia settled down to grow their family (Danny has two children from a previous marriage). The couple lives full-time on their New Mexico ranch, which lends to their reputation as down-to-earth, “real” people. In fact, even though Julia has a nanny to help out with her kids, she is by all accounts, an incredibly hands-on mom to twin Phinneas and Hazel, born in 2004, and Henry, born in 2007.

Julia is a dedicated, hands-on mom, who believes that making her marriage a top priority is essential not only for mom and dad, but for the kids, too.

“They’re [my children] seeing the things that he [Danny] does and the way that he shares his feelings with me, and the way that I share my feelings with him. The coolest thing you can do for your children is to love each other in their presence.”
(Source: marriage.about.com via Allure and HuffingtonPost.com, “Julia Roberts On Love, Motherhood And Getting Pranked.”)

While Hollywood moms may be better dressed, have personal trainers and come with an entourage of childcare stuff, they’re no different than you and me when it comes to matters of the heart. And there’s nothing closer to the heart of a mom than her kids. On Mother’s Day, we all have that in common.