Charoset is one of the traditional foods featured at the Passover seder. This fruit-based spread is intended to remind its eaters of the mortar the Jewish slaves used between their bricks. 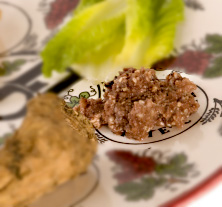 The charoset is served in a sandwich with maror (bitter herbs), between two pieces of matzah. The sting of the maror, which represents the bitterly hard labor of the Jewish slaves, is oft set by the sweet charoset.

If you are in charge of making charoset for this year’s seder, check out the following recipes.

Traditional CharosetWe’ve included a traditional recipe based on apples, walnuts and wine; a Yemenite version with apricots and cumin; and even a California fusion charoset for all you New Age eaters!

Combine all ingredients. You may blend all or some of the ingredients in a food process for a smoother version. For a chunkier charoset, chop manually. Cover tightly and refrigerate for several hours before serving.