Did You Know? Facts & Figures About the Jewish Holiday of Passover

Did you know that Passover celebratesthe exodus of the Israelites from Egypt? On a broader level, the holiday also marks the birth of the Jewish nation, whose journey began with 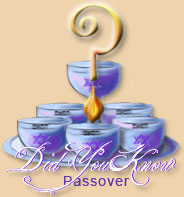 Moses leading them across the Red Sea and culminates with G-d giving them the Torah on Mount Sinai fifty days later?

Did you know that the Jewish people were enslaved for 410 years in Egypt? When Moses tried to persuade Pharaoh to release the Israelites, Pharaoh refused. G-d then reigned down a series of ten plagues on the Egyptian people, culminating in the death of the firstborn. After witnessing the devastation of this plague, Pharaoh agreed to Moses’ demand.

Did you know that Pharaoh changed his mind about setting the Jewish people free, sending his army after them? Moses instructed the Israelites to quickly pack their belongings. They were so rushed, in fact, that they did not have time to bake bread for their journey.

Did you know that the first two days of Passover are considered especially holy? It is on these nights that families hold their Passover seders, a 15-step ritual meal in which the exodus story is retold. Up to 85% of all Jews participate in some kind of Passover seder, making it the most widely celebrated Jewish ritual.Did you know that Jews are prohibited from eating bread and other fermented grain products during Passover? This prohibition is a reminder of the fact that the Jews left Egypt in such haste that they did not even have time to let their bread rise. Instead, they baked unleavened bread, or matzah, on their backs as the fled from the Egyptians.

Did you know that the centerpiece of the Passover Seder is the Seder plate? This special plate contains five symbolic foods, which remind participants of the bitterness of slavery and the exaltation of exile.

Haroset is a mixture of walnuts, apple, cinnamon and red wine that symbolizes the mortar used by Jewish slaves who laid Pharaoh’s bricks

Beitzah or egg is a symbol of rebirth Zroa is the shank bone, which represents the sacrificial lamb offering

Karpas is a symbol of spring, usually represented by celery or parsley; the karpas is dipped in salt water to symbolize the tears of the Jewish slaves

Maror or bitter herbs, most typically grated horseradish, represents the bitterness of slavery

Did you know that at the Passover seder, the Hagaddah, or story of the Jewish exodus, must be read? The reading, which is interrupted in the middle for a festive repast, can take several hours. Some families are up reading the Hagaddah well past midnight.

Did you know that the holiday of Passover is celebrated for eight days? In Israel, the holiday is one day shorter- just one week long.

Did you know that before Passover can begin, one must thoroughly clean his house and rid it of all chametz, or leavened bread products. Counter tops must be bathed in bleach, couch cushions must be overturned, and cooking surfaces must be burned clean. Even everyday plates, glasses and silverware must be put away and replaced with special ones just for Passover. This Jewish version of Spring Cleaning typically takes several weeks to complete.

Did you know that in addition to its religious significance, Passover also has an agricultural foundation? The holiday marks the beginning of the spring harvest season, which culminates seven weeks later with the Jewish holiday of Shavuot.

Did you know that the Hebrew word for Passover is Pesach? Like the English name for this holiday, Pesach means passing over, and refers to G-d’ssparing of the firstborn Jewish males during the 10th Plague, which smote all firstborns in Egypt.

Did you know that during the seder, participants must drink four cups of wine (grape juice may be substituted)? An extra cup is set out on the table for the Jewish prophet Elijah, who is said to visit every Passover seder.

Did you know that at some seder tables a second cup, known as Miriam’s Cup, is also set out? Miriam’s Cup, in honor of Moses’ sister, is filled with water and symbolizes the miracle of Miriam’s well, which sustained the Israelites during their long journey in the desert. It is also used to highlight the contributions of women to Jewish culture, both past and present.

Did you know that at the Passover seder, the youngest child is instructed to recite the Four Questions? Known in Hebrew as Mah Nishtana, these questions evoke the central themes of the holiday:

Why do we only eat matzah on this night?

Why do we eat bitter herbs on this night?

Why do we dip our foods twice, once in charoset and once in salt water, on this night?

Why do we eat in a reclining position, propped up by pillows, on this night?

Did you know that during Passover, Jews of Eastern European descent (known as Ashkenazic Jews) abstain not only from eating chametz, but also from eating kitniyot — corn, rice and legumes. This stringency is not observed by Sephardic Jews, who descend from the 14th century Spanish Jewish community where eating kitniyot was permissible.