Several new Passover seder rituals are being adopted by Jewish familes to honor the role of Miriam, Moses’s sister and the Prophetess in the Exodus, and to highlight the contributions of women 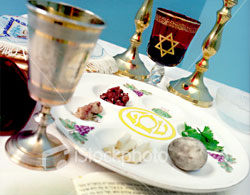 to Jewish culture, both past and present.

A second cup, called Miriam’s Cup, is being added to the Passover dinner table along with Elijah’s Cup. Miriam’s Cup is filled with water and symbolizes the miracle of Miriam’s well, which sustained the Israelites during their long journey in the desert.