Imagine the frivolity of Carnival, the youthful exuberance of Halloween, and the bravado of a thousands 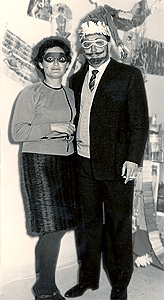 year old war victory – all rolled into one day. That’s how Israelis celebrate Purim, the Jewish holiday commemorating the foiling of a plot to kill the Jews of ancient Persia.

This boisterous holiday falls on the 14th of the Jewish month of Adar, which usually corresponds to the middle of March. The protagonists of the Purim story are the king of ancient Persia Achashverosh, his new bride, Queen Esther the Jewess, and the King’s evil advisor, Haman.

The fixation of Haman’s evil ways was his plot to kill the Jews. But Queen Esther – and her uncle Mordechai – stepped in to plead their people’s case with the king. They convinced Achashverosh to spare the Jewish people from Haman’s evil decree. And then to seal the deal, the king ordered Haman (and his minions) hanged instead.

Despite the macabre overtones of the holiday, Purim today is actually a fun-filled festival, featuring sweet parades of costumed children and the exchange of baskets stuffed with hamantashen and other Purim pastries.

For many, Purim is even a New Year’s Eve-like excuse to imbibe. Jewish law actually proscribes that revelers (at least those over the legal drinking age) drink so much that they can no longer distinguish between the names of Purim’s hero, Mordechai, and its villain, Haman.

For most American Jews, Purim is commemorated at synagogue or perhaps the Jewish community center. Parties are enjoyable, but usually stop shy of truly boisterous.

In Israel, however, Purim is as intensely ruckus as Carnival in Brazil or Mardi Gras in New Orleans. Every city, large and small, has a parade. The one in Tel Aviv is so over-the-top that cross-dressing drag queens can usually be seen mingling amongst the clown-clad kiddies.

School children often have multiple costumes. After all, why pick just one superhero or princess when your teacher lets you come in costume the whole week! In the days leading up to Purim, even teachers and administrators come to school in costume.

For weeks, every grocery store and baker is hawking the Purim pastry ofHamantashen. By the time the holiday finally rolls around, everyone has more than had their fill of these poppy-seed and prune-filled delights, so prices are slashed to a dime a dozen.

The actual day of Purim is a holiday from school, so that is when kids attend their neighborhood Purim party, sponsored by the local community centers. These affairs are loud and rocking, with blaring DJs, smoke machines and copious amounts of junk food.

Teenagers get in on the action at night, when there parties feature perhaps mellower music, but a near hyper-like consumption of alcohol.

While there is no trick-or-treating on Purim, the holiday still has that Halloween-like quality that most likely comes from ingesting way too many sugared treats. Religious and secular alike in Israel can be seen on Purim morning delivering baskets of food – usually sweet pastries and candy toffees – to their friends and family members.