Did You Know? Facts, Figures & Folklore about the Jewish Holiday of Shavuot

Did you know that the word Shavuot means “weeks” in Hebrew? 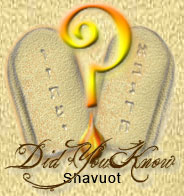 The name of the holiday refers to the fact that it falls exactly seven weeks, or 49 days, after the Jewish festival of Passover.

Did you know that the holiday of Shavuot commemorates the giving of the Ten Commandments to Moses on Mount Sinai?

This is the seminal event in the formation of the Jewish people.

Did you know that on Shavuot, many Jewish people stay up all night studying Torah?

This all-night vigil is linked to the morning on which the Jewish people received the Torah, when legend teachers that the Israelites overslept. In order to ensure that such a slight never happens again, Jews traditionally stay up all night on the evening of Shavuot, studying the tractates handed down to Moses the following morning.

Did you know that on Shavuot, it is customary to eat only dairy foods?

One possible explanation is related to a verse in the Torah, which says, “And He gave us this land, a land flowing with milk and honey.” Cheesecake and blintzes are two traditionally favorites on Shavuot.

Did you know that many Jewish communities read the Book of Ruth during Shavuot services?

Ruth was the first convert to Judaism and reading her story is said to be a parable for whole-hearted way in which the Jewish people accepted the Torah.