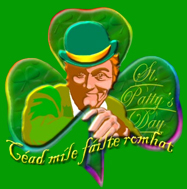 The luck o’ the Irish and St. Patrick’s Day are just around the corner. Parades, shamrocks, and lots of little leprechauns with their pots of gold. Of all the symbols of St. Patrick’s Day, the leprechaun is both the most light-hearted and perhaps the least understood.

Read on for some fun facts about the origin of the little green guy and his possible connection to the St. Patty’s Day holiday.

The leprechaun is Ireland’s national fairy. He stands less than 3 feet tall, dressed all in green, with a pointy, feathered cap atop his head and two gold coins clutched in his hands. In the first hand, he grasps a magic coin that always returns to the purse once it’s spent; in the other, he holds a dummy coin, which turns to rock or ashes as soon as it’s spent.

Cobblers by profession, the leprechauns are legendary hard-workers, known for their solitary and surly qualities. These made the leprechauns the ideal candidate for their best-known role: guarding the fairy treasure.

Legend tells that if you are lucky enough to find a leprechaun, you must be careful not to let the little green guy out of your sight until he tells you where the pot of gold is. You had better be on your toes, though, because leprechauns are known to be cunning and quick – in the blink of an eye, the gold guard will dash out of sight, taking your hopes for good fortune with him.

So what does all this have to do with St. Patrick’s Day? Truthfully, probably not much. Except that St. Patty’s has become a celebration of everything Irish – and nothing is more Irish than the Emerald Island’s national fairy.

Golden Legend Plus Leprechaun Fish Game Igs Board With Io
$2610.0

Midnight Studios Leprechaun Halloween Prop Life Sizes Hand Made One Of A Kind
$800.0