A Pot of Gold at the End of the Rainbow

Physics teaches that rainbows are created when the sunlight reflects off of raindrops, breaking up the light 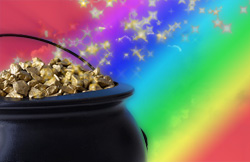 into different wavelengths of color. This atmospheric phenomenon is most likely to occur immediately after a rain shower, when the sun is shining again, but condensation still lingers in the air.

The rare and lovely appearance of rainbows makes them incredibly magical for children and adults alike. Perhaps this magic first inspired the notion of a pot of gold at the end of the rainbow.

Dating back to Old Europe, the legend of the pot of gold is claimed enthusiastically by the Irish. They’ll tell you that fairies put the gold there and then the leprechauns guard it. This folklore has become part of the symbolism of St. Patrick’s Day, a holiday that celebrates everything Irish � including the hope and luck it takes to find that elusive pot of gold.
If you don’t want to spend (or waste) your time searching for treasure on St. Patrick’s Day, you can instead try this fun craft of making a rainbow and pot of gold at home with your kids. You’ll need a paper plate, a toilet paper roll, a few cotton balls and some glue, paint and gold glitter.

Cut the toilet paper roll to about 2 inches in height and paint it black.

Cut the paper plate in half and then cut out an arc shape from the ridged edge of the plate. The end of the arc should be narrow enough to fit into the tissue roll. Paint the arc to look like a rainbow.

Once the paint dries, slip the end of the rainbow into the roll and glue in place. Paint the cotton balls gold and sprinkle them liberally with gold glitter. Let them dry and then stuff inside the remaining space of the roll. Glue into place as needed.