The Story of Saint Patrick’s Day 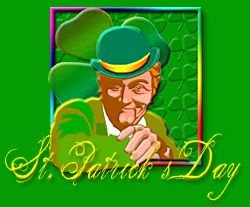 The luck of the Irish is coming to a town near you this March 17th. In cities across America and Ireland, St. Patrick’s Day celebrations are gearing up to include parades, parties and more.

Of course, for those who commemorate the holiday’s historical origin, St. Patrick’s Day is not just a fun excuse to drink the day away. It is a day for spiritual renewal and thanksgiving, in honor of the death of Saint Patrick.

The patron saint and national apostle of Ireland, Saint Patrick has been historically credited with formalizing the presence of Christianity in Ireland during the 5th century BCE. He is said to have abolished the Druid’s pagan rites and converted and baptized their warrior chiefs.

Legend tells that the Irish apostle used the shamrock to explain the Christian concept of the Trinity to potential converts. The three leaves of the shamrock, which today is a popular symbol of the St. Patrick’s Day holiday, were used to represent the father, the son, and the holy spirit.

There are multiple accounts of the location and events leading to Saint Patrick’s death. One fact is unanimously accepted, however: Saint Patrick died on March 17. Since that day, Irish Catholics have celebrated March 17th as a religious holiday.

Because St. Patrick’s Day occurs during the Christian Lent period, religious families would have been prohibited from consuming meat and alcohol. However, these prohibitions were waived on St. Patty’s Day, allowing even the most pious to celebrate the day with a traditional feast of Irish bacon and cabbage and some spirits.

Even still, the holiday was widely regarded as a fairly somber religious occasion. Until the 1970s, Irish law even mandated that pubs be closed on March 17th. Over the last three decades, however, Irish celebrations of St. Patrick’s Day have become increasingly popularized.

In 1995, the Irish government decided to leverage the growing popularity of St. Patrick’s Day by hosting a national celebration. Highlights include a three-day festival in Dublin, which annually draws hundreds of thousands of visitors from around the world.

Unlike in Ireland, the United States has always had secular celebrations of St. Patrick’s Day, dating back as far as 1737 when Boston held its first St. Patrick’s Day parade. Today, people of all denominations and religious backgrounds celebrate the holiday by drinking green beer, wearing green clothing, adorning shamrock pins and attending parades.

Some of the most famous U.S. celebrations include the St. Patty’s Day parades in Boston, New York and Chicago, which are attended by close to a million people each year – with many millions more enjoying them on TV.

These boisterous springtime festivities are even becoming popular in countries without a sizeable Irish population, such as Canada, Australia, Russia and Japan.