Did You Know: Facts, Figures & Folklore About The Jewish Holiday of Sukkot

The jubilant celebration of Sukkot, also known as Chag Ha’Sukkot or Feast of the Booths, falls on the 15th day of the Hebrew month of Tishri, just 5 days after the solemn Day of Atonement, 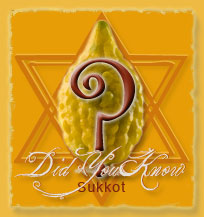 Here are some facts and figures you may not know about Sukkot, the Feast of the Booths.

Did you know that the Jewish festival of Sukkot is known in English as the Feast of Booths or the Feast of Tabernacles? The holiday is named after the impermanent hut-like structures (sukkot) that Moses and Israelites built and lived in as they wandered in the desert for 40 years — after leaving Egypt before reaching the Promised Land.

Did you know that in addition to its Biblical roots, Sukkot is also an agricultural holiday? The festival praises and offers thanksgiving to G-d for the bounty of the fall harvest. Among the rituals of Sukkot is the daily waving of the lulav and etrog, or the “four species“, evoking joy over the final fruit harvest. The ritual is also symbolic of G-d’s divine rule over nature.

Did you know that during Sukkot, many devout Jews not only eat all of their meals in their sukkah (singular of sukkot), but sleep there as well?

Did you know that Sukkot is a nine-day holiday everywhere outside of Israel, but in the Jewish homeland, the holiday is only celebrated for eight days?

Did you know that the ninth day of Sukkot (the eighth day in Israel) is calledSimchat Torah? On this holiday, the final passage of the Torah, or Five Books of Moses, is read and the first passages of Genesis is begun anew. The holiday is celebrated by calling every person up to the Torah for an “aliyah”, or special blessing over the sacred text. Festive dancing is also common.