A Week of Stuffing Recipes to be Thankful For

With Thanksgiving just around the corner, it’s time to plan out your menu and get cooking. Despite some 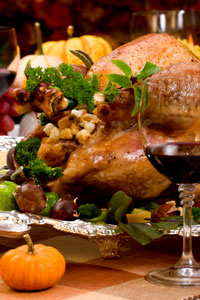 new age chefs trying to tell you to go “non-traditional” this Thanksgiving, I think most of agree that it wouldn’t be Turkey Day without, well, turkey!

And of course, even the most succulent turkey needs a little help from its side dish friends. For some that means sweet potato pie, for others, it’s green bean casserole or mashed potatoes. But the true companion for turkey is, undoubtedly, the stuffing. Now whether you call it stuffing or dressing, one thing is for sure: Everyone at your table will want you to pass some more of it!

If your stuffing is a little lacking, or if you just want to spice up your Thanksgiving table with a new recipe, why not check out one of these top 7 Stuffing (and Dressing) Recipes to Be Thankful For. You can find all of these recipes, and much, much more on Holidays on the Net’s Thanksgiving Recipe Box.

This traditionally Southern recipe, which originally comes from the Cajun Grocer, is a hit with Holiday on the Net’s viewers.

If you’re looking for an alternative to bread stuffing, this recipe from the National Turkey Federation is a great option.

Another favorite from the National Turkey Council, this classic cornbread stuffing evokes the fragrant aromatic of green onion.

It doesn’t get more traditional than a savory and filling classic bread stuffing. While there are numerous variations on this tried-and-true theme, we think our classic recipe beats them all.

Classic is good, but for some families, the key to a successful Thanksgiving stuffing is a little adventure. This recipe for shrimp stuffing definitely delivers adventure … plus some classic Southern flavor.

By now, you may have realized our penchant for the picante at Holidays on the Net. But this outstanding Cajun classic is a favorite of our readers, too, earning it the highest marks in our Thanksgiving recipe box. Why not give it a try this Thanksgiving?