Of all the Thanksgiving symbols the Turkey has become the most well known. The wild turkey is native to 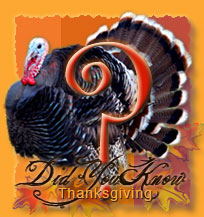 The turkey has brown features with buff-colored feathers on the tips of the wing and on the tail. The male turkey is called a Tomand, as with most birds, is bigger and has brighter and more colorful plumage. The female is called a Hen and is generally smaller and drab in color.

The Tom turkey has a long wattle (a fleshy, wrinkled, brightly colored fold of skin hanging from the neck or throat)at the base of its bill and additional wattles on the neck, as well as a prominent tuft of bristles resembling a beard projecting downward from its chest.

The turkey was originally domesticated in Mexico, and was brought into Europe early in the 16th century. Since that time, turkeys have been extensively raised because of the excellent quality of their meat and eggs. Some of the common breeds of turkey in the United States are the Bronze, Narragansett, White Holland, and Bourbon Red.

Though there is no real evidence that turkey was served at the Pilgrim’s first thanksgiving, in a book written by the Pilgrim’s Governor Bradford he does make mention of wild turkeys. In a letter sent to England, another Pilgrim describes how the governor sent “four men out fowling” returning with turkeys, ducks and geese.