Did you know that celebrating the New Year is a tradition that dates back nearly 4000 years? If you had lived in Mesopotamia and Babylon 4,000 years ago (c. 2000 B.C.), you 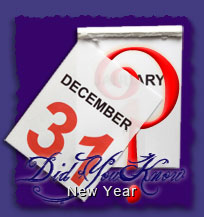 probably would have celebrated the new year in mid-March, at the time of the Vernal (Spring) Equinox. If, however, you were an Egyptian, your new year began with the Autumnal Equinox and the flooding of the Nile. If you were Greek, the Winter Solstice began your new year celebrations.

Did you know that Julius Caesar was the first to set January 1st as the New Year? Caesar did so when he established the Julian calendar. The Julian calendar, named for Julius Caesar, decreed that the new year would occur on January 1st. Caesar wanted the year to begin in January since it celebrated the beginning of the civil year and the festival of the god of gates and, eventually, the god of all beginnings, Janus, after whom January was named.

Did you know that the Babylonians’ celebrations of New Year’s lasted for eleven days? Their parties would undoubtedly have put modern day New Year’s Eve parties to shame.

Did you know that the tradition of setting New Year’s resolutions also dates back to the ancient Babylonians? Their most common resolution was to return used farm equipment.

Did you know that today, “losing weight” is the most common New Year’s resolution? More than sixty percent of adult Americans are overweight and the number of overweight children has more than tripled since 1980.

Did you know that Western nations have only celebrated the New Year for the last four centuries? In medieval Europe the celebrations accompanying the new year were considered pagan and unChristian. In 567, the Roman Catholic church abolished January 1 as the beginning of the year. Thereafter, at different times and in various places throughout medieval Christian Europe, the new year was celebrated on Dec. 25, the birth of Jesus; March 1; March 25, the Feast of the Annunciation; and Easter, which continues to be based on the lunar calendar.

In 1582, Pope Gregory XIII re-established January 1 as new year’s day with calendar reform. Today the Gregorian calendar has become the international standard for civil use.

Did you know that not all cultures and religions celebrate New Year’s Day on January 1st.?

The Baha’i New Year, known as Naw Ruz or “New Day”, occurs on the Vernal Equinox. The Islamic New Year begins on the first day of the first month (Muharram – December 18, 2009) of the Islamic calendar and is known as 1 Muharram. It is generally observed with quiet reflection and prayers. Rosh Hashanah (September 19, 2009), New Years Day on the Jewish calendar, begins a 10 day period known as the High Holy Days – a time of penitence and prayer that ends with Yom Kippur.

In Japan, every February 3 or 4, based on the lunar calendar, Setsubun is celebrated. Although not a national holiday, Setsubun (“sectional/seasonal division”) has marked the last day of winter since the 13th century and is one day prior to the beginning of Spring, signifying a new year with the return of the warming sun, symbolic rebirth, rejuvenation of spirit and body, and preparing for the planting season. The 15-day Chinese New Year (February 14, 2010) is celebrated on the second new moon (lunar) after the Winter Solstice (solar) – occurring between January 20-February 20 – culminating with the Lantern Festival

Did you know that many cultures prepare New Year’s foods that are believed to influence good fortune; or, avoid dishes that might cause misfortune? In many Spanish-speaking countries, eating one grape at each stroke leading up to midnight (12 grapes for the next calendar year), is for good luck. Ollie Bollen – literally “oil balls” – are a traditional New Year’s confection in Holland. These puffed doughnuts are frequently filled with currants, raisins and/or diced apples.

In Japan New Year’s food is called osechi-ryori and is, traditionally, prepared before midnight on December 31 and enjoyed until January 3. There is meaning and symbolism for each food arranged in layers of lacquered boxes – jubako. Media noche (middle of the night) in the Philippines includes 12 round fruits (representing money) for each month of the New Year. Added to the spread on their New Year’s table, Filipinos believe an abundance of food that night is believed to ensure a prosperous new year.

There are, however, beliefs that exclude some foods as bad luck. These include lobsters, they move backwards and chickens, that scratch in reverse. Eating these on New Year’s day might cause a reversal of fortune.

Did you know that throughout the Southern United States, black-eyes are eaten every New Year’s Day? As the story goes, black-eyedpeas were used exclusively for cattle feed in the old South. During the battle of Vicksburg during the Civil War, the town was under siege for over 40 days. No supplies came in or out. Vicksburg was on the edge of starvation. The people had no choice but to eat those black-eyed peas, therefore starting a southern tradition. Today, black-eyes are eaten every New Year’s Day to bring good luck for the new year.

Did you know that prior to 1904, New Year’s Eve was celebrated in New York with much less pomp and partying? Several innovations transformed New York that year: the invention of neon lights, the opening of New York’s first subway line; and the first celebration of New Year’s Eve in Times Square.

The New York Times had just completed building the Times Tower at the intersection of 7th Avenue, Broadway and 42nd Street – dubbed the “Crossroads of the World”. On December 31, 1904, the new building was the focus of an all-day festival concluding in a fireworks display ignited from the base of the tower. At midnight the raucous sound of cheering from over 200,000 merry makers was the genesis of a new tradition.

Today, New Year’s Eve in Times Square is a phenomenon, with hundreds of thousands of people continuing to gather at the Time Tower, now known as One Times Square, waiting in the New York winter. Thanks to satellite technology, a global audience, estimated at over one billion people, watches this ceremony each year.

Did you know that the first use of a Time Square New Year’s Eve Ballwas the result of New York city banning fireworks because they were too dangerous? The owner of the New York Times arranged to have an illuminated seven-hundred-pound iron and wood ball to be lowered from the tower flagpole (77 feet, 23 meters) precisely at midnight to signal the end of 1907. In 1914, The New York Times outgrew Times Tower and relocated to West 43rd Street. By then, however, New Year’s Eve in Times Square had become part of the American tradition.

Today’s Time Square New Year’s Eve Ball was designed by Waterford Crystal. The Ball is a geodesic sphere, 11,875-pounds and 12-foot in diameter. The ball is lowered starting at 11:59:00pm and reaching the bottom of its tower 60 seconds.

It’s the most commonly sung song for English-speakers on New Year’s Eve. Guy Lombardo, who popularized the piece with his band, first heard the song sung by Scottish immigrants. From 1929-1959 his band played every New Year’s at the Roosevelt Hotel in New York, with the first radio broadcast in 1929. The first televised New Year’s celebration with Lombardo’s band was in 1954 and continued until 1976. Dick Clark’s New Year’s Rockin’ Eve televised broadcast began on December 31, 1972 to bring in a “younger crowd”, but, kept Lombardo’s rendition of Auld Lang Syne to be the first song played in the new year. For many, not hearing it would make their New Year celebration seem “unofficial,” somehow.

Did you know that the U.S. annually manufactures more than $475 worth of effervescent wines, including sparkling wines and champagne? Champagne sales spike in the days leading up to New Year’s Eve, when the bubbly drink is the most popular one at the bar.

Did you know that when Americans ring in the New Year on January 1st, more than 303 million people are projected to be living in the United States?