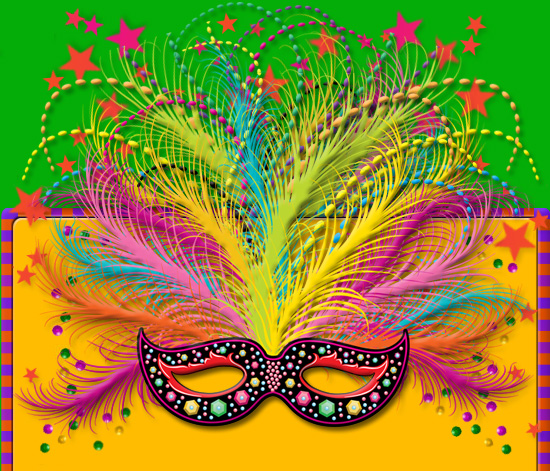 Happy Mardi Gras! Holidays on the Net is delighted to invite you to our bash in honor of Fat Tuesday. Celebrated throughout the Gulf Coast, Mardi Gras is practically synonymous with New Orleans. But you don’t have to live in Creole Country to enjoy a good party. In fact, if you want to get in on the fun, just come join us for our Mardi Gras Ball!

Learn all about the history of Mardi Gras, AKA Fat Tuesday (including just what’s so “fat” about this mid-winter Tuesday). Discover the magic of a Mardi Gras parade and investigate their myriad traditions, like throwing beads, doubloons and trinkets. Try out our recipe for the traditional King Cake, or make some of your own party goodies — maybe even your very own parade float!

If you have young children, you will definitely enjoy our Mardi Gras coloring pages and craft projects, including instructions for making your own festival masks. And if you are planning a Fat Tuesday party, why not create your own Mardi Gras version of Trivial Pursuit, using the fun Did You Know tidbits we worked up just for you.

Mardi Gras will be celebrated on February 9th, 2016

History of Mardi Gras
The history of “Fat Tuesday”.

The Story of Mardi Gras
Another look at Mardi Gras.

The Colors of Mardi Gras
The official colors for Mardi Gras are purple, green, and gold.

Mardi Gras Parades
What’s a holiday without the Parade?

“Throw me something, Mister!”
Beads, Doubloons, and Trinkets. Oh My!

The Mardi Gras King Cake
Yum Yum! And the recipe too!

Mardi Coloring Pix
Easily print out these holiday related coloring pictures. All you’ll need to bring are the crayons.

Video Gras
Get a taste of the festivities with these videos from some of the many Mardi Gras parades.