The Mardi Gras season begins on January 6 and continues until Fat Tuesday, the day before Ash 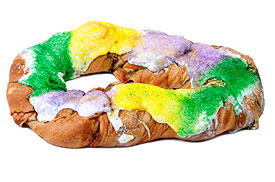 Wednesday. During this time of year, one of the most beloved traditions in New Orleans is that of the King Cake

On the Christian calendar, the twelfth day after Christmas is known as “Epiphany”, “Twelfth Night”, or “Kings Day.” It is the day the gift-bearing Magi visited the baby Jesus, and is celebrated with its own unique rituals.

The New Orleans tradition, begun in the 1870s, borrows heavily from European customs. As part of the celebration of Mardi Gras, it is traditional to bake an oval cake in honor of the three kings – the King Cake. The shape of a King Cake symbolizes the unity of faiths. Each cake is decorated in the traditional Mardi Gras colors: purple represents justice, green represents faith and gold represents power. A small baby, symbolizing the baby Jesus, is baked into each cake.

In New Orleans, King Cake parties are held throughout the Mardi Gras season. In offices, classrooms, and homes throughout the city, King Cakes are sliced and enjoyed by all. Like the biblical story, the “search for the baby” adds excitement, as each person waits to see in whose slice of cake the baby will be discovered.

While custom holds that the person who finds the baby in their slice will be rewarded with good luck, that person is also traditionally responsible for bringing the King Cake to the next party or gathering.

The traditional King Cake is made from twisted strands of cinnamon dough, topped with icing, and sprinkled with purple, green, and gold colored sugar. Today, many additional varieties of King Cake are also available, with fillings such as cream cheese, strawberry, apple, and lemon.

Make your own King Cake with our recipe

Separate the cinnamon rolls and roll them out by hand so that they look like a hot dog. Shape the roll into an oval, pinch the ends together, and place on a cookie sheet. Cook as directed.

While they are cooking, use food coloring to dye sugar. Make one part purple using blue and red, one part green, and one part gold using yellow. When they are finished cooking, ice the tops with the white icing. Sprinkle the different colors of sugars alternating as you go around the oval. Enjoy!