In 46 B.C. Julius Caesar introduced a new, solar-based calendar that was an improvement on the ancient Roman calendar, which was lunar-based and had become inaccurate over the years. A 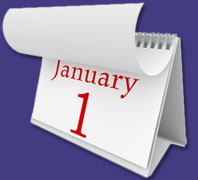 lunar-based calendar is founded on the cycles of the moon – the synodic period. However, there is variation in the precise time for a specific lunation – the time between successive new moons – from 29 days, 6 hours, 35 minutes to 29 days, 19 hours, 55 minutes. Therefore, cumulatively, any lunar-based calendar will be “adding” time over any prolonged period. The Julian calendar, named for Julius Caesar, decreed that the new year would occur on January 1st. Julius wanted the year to begin in January since it celebrated the beginning of the civil year and the festival of the god of gates and, eventually, the god of all beginnings, Janus, after whom it was named. Combining these two celebrations joined the civil and the religious/pagan fetis, the genesis of the word festival.

Romans traditionally exchanged gifts – strenae – of good omen on January 1, the Kalends (root of the word calendar) of January. These gifts included sweet dates, honey and coins. In addition, it was the beginning of the one year term for the consuls, who had a procession on January 1 and, also, wanted a good omen for their tenure.

With Constantine (274-337 A.D.), the first Christian Roman emperor, New Year’s evolved into a day of fasting rather than feasting, as had become the custom to celebrate Janus.

In medieval Europe, however, the celebrations accompanying the new year were considered to have become pagan and unChristian. In 567, the Roman Catholic church, at the Second Council of Tours in France, abolished January 1 as the beginning of the year. Thereafter, at different times and in various places throughout medieval Christian Europe, the new year was celebrated on Dec. 25, the birth of Jesus; March 1; March 25, the Feast of the Annunciation; and Easter, which continues to be based on the lunar calendar.

In 1582, Pope Gregory XIII re-established January 1 as new year’s day with calendar reform. Today the Gregorian calendar has become the international standard for civil use. Although most Catholic countries adopted the Gregorian calendar, it was only gradually adopted among Protestant countries, who didn’t recognize the Pope as their ecclesiastical leader. The British, for example, did not adopt the reformed calendar until 1752. Until then, the British Empire, and its’ colonies, continued to celebrate the new year in March. In the beginning years of British America, Puritans disavowed any new year observances at all. Still associating any celebrations with pagan traditions, Puritans wouldn’t speak the word “January,” calling it “The First Month” because of the association with the pagan god, Janus.

Given the various measures of time and the influence of power and the persistence of belief, the history of new year has been determined by shifts in liturgical, civic, religious, lunar, solar and seasonal variations. However, by all accounts, celebrating New Year’s has been, and continues to be, a time of rejuvenation and renewal, whether reflected upon quietly, with piousness or with days of feasting and frivolity