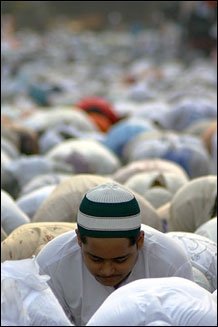 the fast.” The holiday marks the end of Ramadan, the holy month of fasting and is a culmination of the month-long struggle towards a higher spiritual state.

Ramadan holds special significance for Muslims, since the Quran, the book of Muslim scripture, was revealed during this month.

It is also the time when Muslims fast from sunrise to sunset every day, refraining from food and water. Fasting is not only a symbol of sacrifice and purification, but also a measure of self-
restraint and to teach humility and patience and for encouraging compassion for those less fortunate. Charity and service are particularly emphasized during Ramadan, and Muslims are required to donate food and a percentage of their wealth to the poor.

The first Eid is considered to have been celebrated in 624 CE by Muhammad after winning the Battle of Badr. At that time, there had been a fast by the armies that was broken after their success in this battle.

As the Islamic calendar follows the lunar cycle, Eid begins with the sighting of the new, crescent moon at the end of Ramadan. Each year, the holiday moves back approximately ten days in accordance with the movement of the lunar cycle.

In South Asian countries, festivities begin on the night before Eid, known as the chand raat or the night of the moon, in India, Pakistan, Bangladesh and Sri Lanka.

Females, particularly younger girls, decorate their palms with henna (mehndi) and dance to traditional music, while cooking for the feasts for the next three days.

In Brunei, Malaysia and Singapore Eid is called Hari Rya Aidilfitri – literally “Grand Day.” Banks, private offices and government are closed, usually lasting one week. It’s customary to wear traditional clothing and to visit the graves of loved family and friends. Referred to as Eid Fetr by the Shia Iranians, Eid is more often celebrated quietly with family. Since charity is required, a ghorbani (sacrifice) is given by wealthier families, often in the form of lamb or a calf. However, in Turkey at the end of Ramazan (Ramadan), Seker Bayrami -“Candy Holiday” – is the three-day celebration for sending greetings to friends, visiting and enjoying sweets.

On Eid morning, which is the first day of Shawwal – the tenth month in the Islamic lunar calendar – families offer a special prayer of thanks, called an Eid prayer, for the help and strength received to practice self discipline during Ramadan. Before the Eid prayer, every Muslim man, woman and child�must pay Zakat al Fitr (a charity) for the month of Ramadan. The Zakat al Fitr is a special offering given in thanks for one’s own prosperity and for having faithfully observed their fast throughout Ramadan. This equates to approximately 4 1/2 lbs. of wheat, barley, dates, raisins; or, the cash equivalent, and is typically collected at the mosque to be distributed to those who are less fortunate in the Islamic community.

After breaking the fast, offering prayers and alms, families begin their celebrations with food and family and friends gathering. In most parts of the Islamic world, Muslims give each other small gifts and wear new clothes, children receive money from their parents, relatives and older friends, special feasts are held, and desserts adorn the table for days while families and friends reunite.