The seventh day of the seventh month in the Chinese lunar calendar* is known as Qi Qiao Jie, or Chinese Valentine’s Day. As in the US and elsewhere this is a day 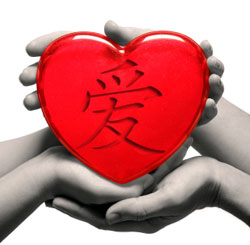 There are many versions of the origins of Chinese Valentine’s Day. One legend involves the Goddess of Heaven and her seven daughters.

It is said that the seven daughters of the Goddess of Heaven, on one of their visits to earth, caught the eye of a Cowherd, Niu Lang. As the daughters were bathing in a river they were observed by the Cowherder who decided to have a bit of fun by running off with their clothing. To get their clothing back, the sisters decided that the prettiest daughter, Zhi Nu (the seventh daughter), would ask the Cowherd to return their clothes.

And since Niu Lang had seen Zhi Nu naked, they had to be married. The couple lived happily for several years. And depending on which legend is followed, either Niu Lang died or the Goddess of Heaven simply became fed up with her daughter’s absence and ordered Zhi Nu to return to heaven.

Either way, the Goddess of Heaven took pity on the couple and allowed them to be reunited once a year. And it is said that on this seventh night of the seventh moon, magpies form a bridge with their wings for Zhi Nu to cross to meet her husband.

This day is also called The Begging Festival or The Daughter’s Festival, which is an important day for girls. In the evening girls would prepare melons, fruits and worship, praying that their wishes for a good marriage will become true.
*The holiday is celebrated in the Western Calendar during the month of August.