What better time to visit our nation’s capital than America’s Independence Day? In the birthplace of the nation, you can walk through the footsteps of American history by day and be swept up in one of the country’s best fireworks shows by night. When planning your trip’s itinerary, you’ll want to be sure to include these eight must-see memorials and monuments. If visiting these sites doesn’t give you a shot of patriotic pride, nothing will! 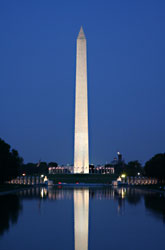 The Monument, which sees 800,000 visitors each year, is open year-round, except December 25, from 9 a.m. to 4:30 p.m. There is no charge for admission, although you do need a ticket with an assigned time for your entrance. Free tickets are available at the kiosk on 15th Street and Madison Drive, on the monument grounds.

The Washington Monument is Metro-accessible (Smithsonian station on the Blue and Orange lines.) For more information, call the Visitors Information Center at (202) 426-6841.

Dedicated in 1997, the Franklin Delano Roosevelt Memorial is the nation’s newest presidential memorial. The multi-staged memorial honors the President who led America out of the Great Depression and through bitter victory in World War II.

Sitting astride 7.5 of garden acres in the heart of Washington, D.C. the FDR Memorial is comprised of four outdoor sculpture galleries — one for each of FDR’s four terms in office (1933 to 1945). Roosevelt was the only president elected four times. In 1951, the number of consecutive terms a president may serve was limited to two by the ratification of the 22nd Amendment to the Constitution.

The FDR Memorial, which is open daily from 8 a.m. to 11:45 p.m., is Metro-accessible (Smithsonian station on the Blue and Orange lines.) Admission is free. 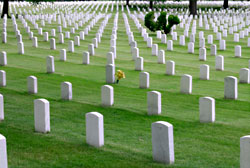 What better way to appreciate the bounty of being an American than to visit our nation’s largest military cemetery? Arlington Cemetery is the final resting place for America’s war heroes and veterans, U.S. Presidents Kennedy and Taft, Supreme Court Justices, astronauts, prominent explorers and major historical figures.

Also at Arlington is the Tomb of the Unknowns, which stands as a memorial to American servicemen and women who have died but whose remains were not identified. More than 4 million people visit the cemetery each year.

The cemetery, which is open year-round except for December 25, is Metro-accessible (Arlington National Cemetery station on the Blue line.) Admission is free. For more information, contact (703) 607-8052. 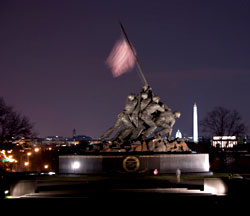 The Iwo Jima Memorial pays tribute to all the American marines who have died in service of their country, from 1775 until the present. The moment captured by the sculpture served to be a seminal point in War World II: Iwo Jima led to end of the war against Japan in 1945.

The memorial site is Metro-accessible (Rosslyn Metro Station on the Orange and Blue lines.) The site is open daily, 24 hours a day. 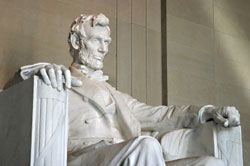 The regal Lincoln Memorial pays tributes to America’s 16th president, Abraham Lincoln, who presided over a divided nation during the Civil War (1861-1865) and issued the Emancipation Proclamation (1863) to end the institution of slavery.

Dedicated in 1922, the Lincoln Memorial features a seated, larger-than-life President Lincoln surrounded by 36 44-foot high columns. The columns represent the 36 states that were in the Union at the time of the President Lincoln’s assassination in 1865.

Parking is extremely limited, but the Lincoln Monument is Metro-accessible (Foggy Bottom station on the Blue and Orange line.) The Memorial is open year-round, 24 hours a day.

The rotunda-shaped Jefferson Memorial pays tribute to America’s 3rd president, Thomas Jefferson. Also an architect, Jefferson designed Monticello and the Rotunda at the University of Virginia, both of which reflect the architectural style of the Roman Pantheon. The Jefferson Memorial was intentionally designed in a similar style to honor the man’s affinity for neo-classical architecture.

Situated in the capital city’s Tidal Basin, surrounded by a grove of cherry blossom trees, the memorial features a 19-foot bronze state of the president. Inscribed around the statue are a number of passages from the Declaration of Independence, which was written by Thomas Jefferson.

The memorial is open year-round from 8 a.m. to midnight. The Jefferson Memorial is Metro-accessible (Smithsonian station on the Blue and Orange lines.) Admission is free. 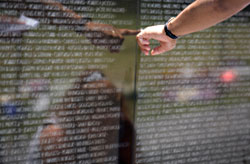 The Vietnam Memorial honors the memories of the 58,209 American soldiers killed or missing in action during the Vietnam War. The memorial is comprised of two perpendicular black granite walls, which are inscribed in chronological order with the name of each soldier, according to the date of his or her casualty.

Completed in 1982, the haunting memorial reflects the faces of its visitors within the seemingly endless list of war dead. The memorial’s designer intended this reflection as commentary on the ongoing legacy of the Vietnam conflict on the American consciousness.

Each year, more than 3 million visitors pass by the memorial wall, often making rubbings of the names of soldiers they loved and lost. An alphabetical list of the inscribed names is available at the kiosk on the memorial grounds.

The Vietnam Memorial is Metro-accessible (Foggy Bottom station on the Blue and Orange line) and open year-round. The memorial is staffed from 8:00 a.m. to midnight, although visitors are welcome to visit 24 hours a day. Admission is free. 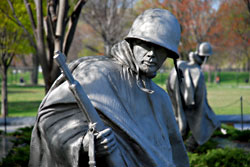 Dedicated in July 1995, on the 42nd anniversary of the armistice that ended the war, the Korean War Memorial is one of the most recent additions to the city’s memorials. The modern design features an enormous circle interested by a triangle, in the middle of which are 19 steel statues of larger-than-life figures from the Korean War.

Within the large circle is the shallow watered Pool of Remembrance, which includes inscriptions for the 54,246 soldiers killed and the 103,284 soldiers wounded. The path leading up to the Memorial is lined by a 164-foot-long black granite wall with a collage of sandblasted images of soldiers who served and died in the war.

The memorial is Metro-accessible (Foggy Bottom station on the Blue and Orange line). It is open year-round, 24 hours a day. Admission is free.