Did You Know? Facts, Figures and Folklore about the Jewish Holiday of Purim

Did you know that the word Purim is Hebrew for “lots”? 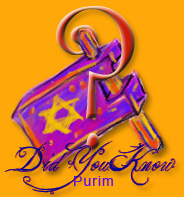 The name of the holiday refers to the plot of the king’s advisor, Haman, to draw lots for which Jews to kill first. He planned to massacre all the Jews. Esther, one of the king’s wives and a Jewess herself, saved the Jewish people from Haman’s “lots” plot by revealing it to the king.

Did you know that the only holy Jewish book in which the word for “lots” appears is the Book of Esther, traditionally read on Purim?

Did you know that Book of Esther retells the story of Purim, when the Jewish people were spared from a death decree by the King of Persia’s evil advisor, Haman?

The Book of Esther is traditionally written upon a scroll, known as “Megillat Esther“. The megillah is read twice during the holiday — once at night, and once the next morning. Purim, like all Jewish holidays, runs for approximately 25 hours, beginning at sunset.

Did you know that the expression “the whole megillah” comes from the holiday of Purim?

On Purim, the story of Esther is read from a scroll known as a megillah. The whole megillah must be read twice on Purim, once at night and once the following morning.

Did you know that Purim is one of the most joyous holidays in the Jewish religion?

So joyous, in fact, that the rabbis have actually commanded adults to get drunk on the holiday of Purim.

Did you know that there is even a Purim custom that calls for getting inebriated?

Indeed, Jewish law commands that Purim revelers get so intoxicated that they can’t tell the difference between the names of the hero of the Purim story, Mordechai, and its villain, Haman.

Did you know that in addition to being one of the most festive holidays, Purim is also one of the noisiest?

That’s because every time Haman’s name ismentioned during the reading of the megillah, worshippers are instructed to make as much noise as possible to drown out his name. A special instrument was even created for all this noisemaking, called a gragger (grogger).

Did you know that whenever Haman’s name is mentioned during the reading of Megillat Esther, listeners are required to make so much noise that they drown out his name?
Traditionally this is accomplished with a noise-maker, known in Yiddish as a “gragger” or in Hebrew as a “ra’ashan”. Making graggers is a fun way to get children involved in the Purim spirit. Simply fill a container with dried beans or lentils and then decorate it. Now kids can shake their own gragger!

Did you know Jewish people have a custom of giving alms to the poor on Purim?

The specific proscription is to give three half-dollar coins, symbolizing that the giver is part of the larger whole. Everyone, rich and poor alike, is required to give the same amount on Purim, since everyone has an equal role in the destiny of the Jewish people.

Did you know that Jewish people also have a custom to give friends and family members food baskets specially prepared with at least two different types of ready-to-eat foods?

The rationale behind this custom is likely linked to another tradition — having a feast in the late afternoon. The baskets ensure that everyone has enough food to eat at the Purim feast.

Did you know that hamantashen are a three cornered pastry filled with poppy seed that are served on Purim?
The cookies are named for the three-cornered hat that Haman wore. In Hebrew, hamantashen are called oznei haman, or Haman’s ears. (Hamantashen recipes).

Did you know that on Purim, children dress up in costume for Purim parades and carnivals?

Did you know that Purim is celebrated during a Jewish leap month?

The holiday falls on the 14th of the month of Adar. When there is a leap year, there are two Adars (Adar Aleph and Adar Bet). Purim is celebrated in Adar Bet during a leap year.

Did you know that in walled cities, like the Persian city in which the story of Purim first took place, Purim is celebrated a day later, on the 15th of Adar?

Today, the only recognized walled cities celebrating the later Purim date are Jerusalem, Hebron and the Old City of Tzfat in northern Israel.

Did you know that the holiday of Purim begins on the 13th of Adar (regardless of whether or not you live in a walled city) with the Fast of Esther?
In Hebrew, this fast is known as Ta’anit Esther. The day-long fast commemorates Esther’s three-day fast before she revealed her true identity to the king and pleaded for her people’s safety.

Did you know that the Book of Esther is the only holy Jewish book that does not ever mention G-d’s name?

Did you know that Purim is one of the only Jewish holidays not commanded in the Torah?
The holiday can trace its roots to the Talmudic period. The earliest known celebration of Purim was in the 2nd century CE.

Did you know that there is a town in Missouri called Esther?
There is also one in Louisiana.