Thanksgiving Day in Canada: The History and Origin of a Northern Thanksgiving

While Americans begin gearing up for Thanksgiving in the days following Halloween, Thanksgiving 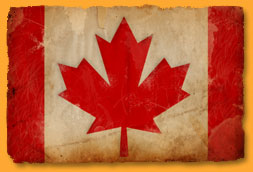 celebrations in Canada are long since over by October 31st. That’s because in Canada, Thanksgiving is celebrated on the second Monday in October.

Unlike Americans, whose holiday recalls the Pilgrims landing in America, Canadians spend their Thanksgiving giving thanks for a successful harvest, which typically culminates by early October in the northern country of Canada.

Canadian Thanksgiving traces its roots to an old European farming custom of banding together to toast a plentiful harvest. After hundreds of years of unofficial celebration, the Canadian Parliament officially recognized the folk practice in 1957.

The traditional Canadian Thanksgiving meal is similar to the feast served at the American counterpart: turkey (although ham or other roasts may be substituted), gravy, stuffing, autumn vegetables and fruit desserts. Canadians also place a cornucopia at the center of the table; the cornucopia is a curved ram’s horn filled with fruits and grains.