During the Saint Patrick’s Day season, shamrocks are everywhere – from storefront displays to classroom 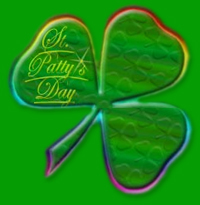 bulletin boards. Even people’s lapels sport the green three leaf clover. As the unofficial state flower of Ireland, the shamrock is the most prolific symbol of the Irish holiday.

Legend teaches that the first shamrock was a sacred plant discovered by the Druids of Ireland. These Celtic pagans revered the shamrock for its triad leaf formation, as three was a mystical number in their religion.

In the 5th century, Saint Patrick is said to have used the shamrock to teach the doctrine of the Holy Trinity to the Irish pagans. With the three leaves representing the father, the son, and the holy spirit. Saint Patrick is credited with introducing Christianity to Ireland and converting hundreds of Celtic castles.

During the 19th century Irish rebellion against England, wearing the shamrock took on political significance.

Seen as a symbol of Irish pride, British law made wearing it punishable by death. It was during this period that the term “wearin’ o the green” came into use.

Still today, displaying a shamrock and wearing green are considered expressions of Irish identification. Of course, they are no longer criminal offenses. Especially on St. Patrick’s Day, when everyone – Irish or not – will be showing off their green pride. As the saying goes, “Everyone wants to be Irish on St. Patrick’s Day.”