The History of the Advent Calendar 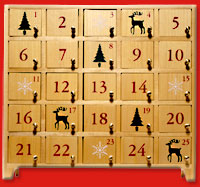 arrival of Christmas. The term Advent comes from the Latin “adventur”, meaning arrival. Many advent calendars have a place for a candy or other treat on each day, helping to heighten the sweet anticipation of Christmas.

The tradition of marking the Advent dates back to the early 19th century, when religious Protestant families made a chalk line on their front door for every day in December until Christmas Eve. According to Sellmer-Verlag, the Dutch on-line museum of Advent Calendar history, the first Advent Calendar was handmade in 1851. Early Advent styles also included the Advent Candle, in which a ring orwreath of 24 candles would be used to illuminate each day until Christmas.

Sellmer-Verlag cites the German-born Gerhard Lang as the inventor of the first mass-produced Advent Calendar. Lang was inspired by the calendars he remembered his mother making for him as a child. She would attach a candy to a hand-drawn cardboard calendar. Instead of candies, Lang’s printed version featured tiny pictures that could be affixed to each day of the Advent. Lang later produced several different versions of the calendar, including ones with little doors to open, revealing a picture for each day.

The German printing company Sankt Johannis capitalized on Lang’s idea, producing calendars with Bible verses instead of pictures behind each window. The Advent Calendar became increasingly popular in Germany and throughout Central Europe until World War II, when manufacturers were forced to shut down production due to the war rationing on cardboard.

By the 1940s, the tradition of the Advent Calendar had jumped the Atlantic Ocean and taken root in American culture. Here, the first chocolate-filled calendars were sold in the late 1950s.

Today, families fill their Advent Calendars with everything from pictures of Jesus and Bible versus to matchbox cars, chocolates or stickers. Some families cleverly save their loot of Halloween candy and repurpose it for their Advent calendars.

Advent Calendars can be printed on cardboard, built from thin-wood boxes, constructed from felt or other fabric, or even erected from Lego’s®. You can purchase a variety of styles of Advent Calendars from online and brick-and-mortar vendors — or you can start a new tradition and make your own Advent Calendar this year.

ANTENNA ADVENT 1.5M FOR TRUCK WITH INOX BASE AND CONTROLLER