Did You Know? Facts, Figures & Folklore about the Christian Celebration of Christmas

Did you know that many of our most popular Christmas traditions today date back over 4000 years?

Many of our Christmas traditions were celebrated centuries before the Christ child was born. The 12 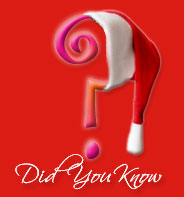 days of Christmas, the bright fires, the yule log, the giving of gifts, carnivals(parades) with floats, carolers who sing while going from house to house, the holiday feasts, and the church processions can be traced back to the earlyMesopotamians, Europeans and Romans.

Did you know that the word Advent comes from the Latin term “adventur”, meaning arrival?
The Advent Calendar begins on the fourth Sunday before Christmas and counts down the 25 days until the holiday’s arrival. The tradition of counting down the days until Christmas began in the early 19th century in Holland, where families marked a chalk line on their front door each day before Christmas Eve. (BTW – Have you checked out our Advent Calendar? A new holiday video each day!)

Did you know that Santa Claus can also trace his roots back to a Dutch character called Sinterklaas?
When the Dutch colonists came to America, they brought with them the legend of an austere bishop, dressed in a red costume and carrying a book inscribed with a list of all the good and naughty children. To this day in Holland, Sinterklaas delivers gifts to all the “good” children on December 5th, which is St. Nicholas’ Eve. The 5th is the primary gift-giving time of the Christmas season for many Europeans.

Did you know that Santa Claus arrived in the United States in the 18th century via the Dutch founders of New York City?
The Dutch introduced America to their “Sinterklaas” festivities. Sinterklaas is the Dutch name for Saint Nicholas.

Did you know that the first recorded mention of Santa Claus in the United States was in 1773?
The New York press reported a story about a “St. A Claus.”

Did you know that the Roman’s celebrated a festival in mid-December that is believed to have inspired many of our Christmas traditions?
Their festival was called Saturnalia which began the middle of December and ended January 1st. With cries of “Jo Saturnalia!” the celebration would include masquerades in the streets, big festive meals, visiting friends, and the exchange of good-luck gifts called Strenae. The Romans would also deck their halls with garlands of laurel and green trees lit with candles.

The Early Christians wanted to keep the birthday of their Christ child a solemn and religious holiday, not one of cheer and merriment as was the pagan Saturnalia. But as Christianity spread they were alarmed by the continuing celebration of pagan customs and Saturnalia among their converts. At first the Church forbid this kind of celebration. But it was to no avail. Eventually it was decided that the celebration would be tamed and made into a celebration fit for the Christian Son of God.

Did you know that the tradition of indoor Christmas trees began in Germany?
German Christians would bring an evergreen tree into their homes and decorate it with lit candles. Today, we have transitioned to the safer practice of using Christmas lights. The Christmas tree tradition spread to the rest of Europe thanks to Prince Albert, the German-born husband of Queen Victoria, who decorated the first English Christmas tree at Windsor Castle in 1841. German immigrants to the United States introduced Americans to the Christmas tree, which was initially met with much skepticism. By the late 1800s, however, the tree had become an accepted and beloved symbol of the Christmas season.

Did you know that as many as 30 million live (real) Christmas trees are sold every year in the United States?

In 2004, live Christmas tree sales amounted to more than $506 billion in revenue for America’s 22,000 tree farms. The state leader in Christmas tree production is Oregon, with sales of $143 million.

Did you know that for every live Christmas tree that is harvested, three seedlings are planted in its place?

Did you know that it takes an average of seven years for a Christmas tree to reach six feet tall?
Some trees take as long as 15 years to grow to their harvesting height; others reach it in as little as four years.

Did you know that China is the leading manufacturer of artificial Christmas trees?
According to the U.S. Commerce Department, more than 80 percent of artificial trees are made in China.

Did you know that in 2005, Americans spent more money on Chinese-made Christmas ornaments ($561 million) than on Christmas trees grown in the United States?

Did you know that the poinsettia, with its ruby-colored, star-shaped leaves, sees more than $200 million in sales each year, with most of them during the month of December?

Many believe the poinsettia’s star-shaped leaves symbolizes the Star of Bethlehem, which led the three wise men to the manger where the baby Jesus was born.

Another Christmas connection for the poinsettia is linked to the plant’s Mexican origin. Mexican legend tells of an impoverished girl, who had nothing to offer on the alter to Jesus at Christmas Eve other than weeds. Encouraged nonetheless by her priests to give of her spirit, she brought the weeds to her church. Once inside, the weeds miraculously blossomed into a beautiful poinsettia plant. In Mexico, the poinsettia plant is called Flores de Noche Buena, Spanish for “flowers of the holy night”.

Did you know that there is even a special day celebrating the Poinsettia?
Poinsettia Day is observed on December 12, the anniversary of the death of Joel Roberts Poinsett, the American diplomat who first introduced the Central American plant to the United States.

Did you know that Rudolph and the rest of Santa’s reindeer are very much a modern addition to Christmas tradition?
The legend of Santa’s reindeer began in the famous poem, “The Night Before Christmas.” Written by Clement Clarke Moore in 1822, it introduced the notion of Santa’s sleigh being magically pulled by eight mythical reindeer.

Did you know that there is no Rudolph, the most famous of all the reindeer, in Moore’s poem?
Rudolph wasn’t born until more than a century later. In 1939 the Montgomery Ward company wanted to give away a Christmas booklet as a promotional gimmick. The store tapped one of its best copywriters, Robert L. May, to author the booklet. His vision led him to Rudolph the Red Nosed Reindeer, an underdog champion outcast for his glowing red nose. Printed in 1939, the booklet reached a distribution of more than 2.4 million copies through nationwide Montgomery Ward stores. By 1946, more than 6 million copies of Rudolph the Red-Nosed Reindeer had been given out.

In 1949, Gene Autry recorded the musical version of Rudolph the Red-Nosed Reindeer which went on to become the second best-selling song of all time (“White Christmas” is #1). And a special place of Rudolph the Red-Nose Reindeer in America’s Christmas culture was codified in 1964, when an animated version of the story was telecast for the first time. That beloved show has been aired every year since, making it one of the top Christmas shows of all time.

Did you know that the tradition of kissing under the mistletoe dates back to the Middle Ages?
Originally, the custom held that for each kiss under the mistletoe, one berry should be removed from the mistletoe branch. Once all the berries were removed, no more kissing was allowed! Couples avoid this prohibition today by dispensing with the berry removal tradition.

Did you know that the tradition of sending Christmas cards began during the Victorian period?
A British artist named John Horsely was commissioned by the British Postal Service to design the first-ever Christmas card. His illustrated card featured an inscription familiar today: “A Merry Christmas and a Happy New Year to You”.

Did you know that the Italian tradition of the Feast of Seven Fishes is a celebration of the birth of the baby Jesus?
In his honor, many Roman Catholics do not eat meat on Christmas Eve, enjoying instead a feast of seven seafood and shellfish dishes. The number seven signifies the number of days in which G-d created the universe. The Feast of Seven Fishes tradition originated in southern Italy and is still practiced there today, as well as by many Italian American families.