The Story of Santa’s Reindeer

For many of us, Rudolph and the rest of Santa’s reindeer are as much a part of Christmas folklore as the 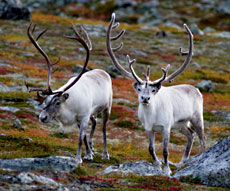 holiday spirit itself. But these classic characters are very much a modern addition to Christmas tradition.

The legend of Santa’s reindeer began in the now famous poem, “The Night Before Christmas.” The poem, written by Clement Clarke Moore in 1822 as a Christmas gift to his children, introduced the notion of Santa’s sleigh being magically pulled by eight mythical reindeer:

When, what to my wondering eyes should appear,
But a miniature sleigh, and eight tiny reindeer,
With a little old driver, so lively and quick,
I knew in a moment it must be St. Nick.

But where was Rudolph, the most famous of all the reindeer, in Moore’s poem?

Rudolph wasn’t born until more than a century later. In 1939 the Montgomery Ward company wanted to give away a Christmas booklet as a promotional gimmick. The store tapped one of its best copywriters, Robert L. May — a 34-year old father whose wife was terminally ill — to author the booklet. With his knack for writing children’s limericks, May was the perfect choice.

May sought out to create a hero for all children, but especially for those like himself, who were taunted and picked on for being smaller and slower than his peers. His vision led him to Rudolph the Red Nosed Reindeer, an underdog champion outcast for his glowing red nose.

Printed in 1939, the booklet reached a distribution of more than 2.4 copies through nationwide Montgomery Ward stores. Paper rationing during World War II curtailed production, but by 1946, more than 6 million copies of Rudolph the Red-Nosed Reindeer had been given out. But by then, May was a widower and single dad, in deep debt from his wife’s medical bills. In 1947, though, May secured his financial future when Montgomery Ward granted him the copyright over Rudolph the Red-Nosed Reindeer.

May okayed the licensing of the first short animated film version of Rudolph in 1948 and in 1949, Gene 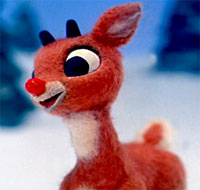 Autry recorded the musical version of Rudolph the Red-Nosed Reindeer. That song went on to become the second best-selling song of all time (“White Christmas” is number one.)

The special place of Rudolph the Red-Nose Reindeer in America’s Christmas culture was codified in 1964, when an animated version of the story was telecast for the first time. That beloved show has been aired every year since, making it the top Christmas show of all time.