The Origin of the Easter Bunny & Colored Easter Eggs

Just as Santa Claus represents Christmas, a hopping life-size bunny with a basket full of colorful eggs is the 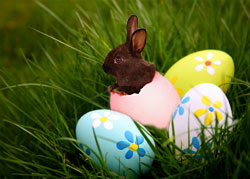 The original Easter bunny was probably associated with the Pagan equinox festival that predated Easter. The Saxons devoted the month of April to celebrating their goddess of spring and fertility, who was, not coincidentally, named Eastre. Eastre’s sacred animal was the hare – not surprising since the rabbit is one of the most common symbols of fertility and rebirth.

The colored eggs carried by today’s Easter bunnies have another, even more ancient origin. Eggs have long been associated with fertility and springtime festivals – for so long, in fact, that the precise roots of the association are unknown. Ancient Romans and Greeks utilized eggs in festivals celebrating resurrected gods. The egg also featured prominently in the Jewish rituals of Passover – and still today the roasted egg has prominence on the seder table as an essential symbol of springtime and rebirth.

Scholars believe that the pairing of the hare and the egg together in Easter may also have Pagan roots. During springtime, when days and nights were equal length, the hare was identified with the moon goddess and the egg with the sun god. Pairing the two together offered a kind of ying and yang to spring equinox celebrations.

The next historical entry under Bunny & Egg is found fifteen hundred years later in Germany. There, children would eagerly await the arrival of the Oschter Haws, a rabbit who delighted children on Easter morning by laying colored eggs in nests. This was also the first known time that the rabbit and egg were iconoclastically linked together.

The German tradition of the Oschter Haws migrated to America in the 1800s, likely accompanying German immigrants, many of whom settled in Pennsylvania. Over the past 200 years, the Oschter Haws or Easter Bunny has become the most commercially recognized symbol of Easter.

Today American children squeal with delight when they see the bunny-whether he’s headlining their neighborhood Easter egg hunt or greeting visitors at the local mall. The Easter bunny and his ubiquitous basket of eggs has surely become the most adored and recognized symbol of the Easter season.