Easter is the predominant springtime feast celebrated by the Russian Orthodox. For religious Russians, the 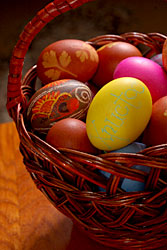 entire Lenten Season, referred to as the Quadragesima, has a markedly different feel than normal, day-to-day life. Historically, all theatre and music performances were banned during Lent, as they were considered distraction from the Lenten proscription to reflect and repent. Today, these public restrictions have lessened, although many individuals still maintain a strict adherence to the requirements of Lent, including not eating meat, eggs or other animal products during the 40 day “fast”.

Holy week, beginning with Palm Sunday, is a time of great activity in Russian homes, including spring cleaning and baking Easter bread. On Holy Thursday, Russians paint their Easter eggs using their traditional method of boiling onion peels and scraps of silk together with the eggs. Painted eggs are a universal symbol of Easter, but in Russia they take on even greater significance. Russian Easter eggs are believed to possess magical powers-from protecting crops to warding off evil spirits. Many hide an Easter egg in the foundation of their home, believing that it will bring prosperity.

On Holy Saturday, a strict day fasting in which no food may be eaten at all, families are nonetheless busy preparing for the Easter feast. The feast, served to break the fast after the midnight mass, includes the Paskha Easter cake, baked on Holy Saturday.

Like in Greece, Easter Mass in Russia is held on Saturday night. Worshipers congregate in a totally darkened church, which symbolizes the despair of a world without faith in Jesus Christ. Historically, the eve of Holy Saturday was considered a haunted time, in which satanic creatures tormented townsmen. People were afraid to go out after dark, but persevered to attend Mass, since Church was considered a safe haven.

As midnight approaches, worshipers light candles and then, at the strike of 12 o’clock, church bells announce the resurrection of Christ. An intensely joyful Orthodox liturgical chant can be heard throughout the streets of Russia until the conclusion of Easter Mass at dawn.

Worshipers return to their homes for a long family feast. Tables are traditionally decorated with fresh flowers and painted eggs. In addition to the Easter bread and Paskha cake, foods prohibited during the 40 Day Fast, such as sausage, bacon, cheese and milk, are also served.

After breakfast, people go out to visit friends and neighbors, bringing with them baskets of painted eggs and Easter breads to exchange. An old Russian fable tells that an Easter egg given from the heart will never spoil. People also visit cemeteries, bringing eggs, bread and even beer to their deceased relatives.

Like the egg cracking game in Greece, Russians also have a game they play with eggs on Easter. Children line up at the top of a hill and roll their eggs down, with the aim of keeping their egg intact while breaking their opponents’ eggs

Many of these beautiful Orthodox customs are now practiced in America and elsewhere around the world, as Orthodox churches have sprung up to meet the needs of immigrant communities. Perhaps this spring, you can visit an Orthodox church or community to experience the magic of an Eastern Easter.