Easter in the Holy Land

Every year, thousands of Christian pilgrims from around the world converge on the Old City of Jerusalem 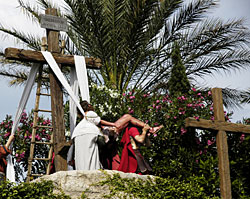 to celebrate the Holy Week of Easter at the biblical site of Jesus’ crucifixion and resurrection.

In addition to international visitors, Jerusalem also welcomes hundreds of Palestinian Christians from nearby Bethlehem, the site of Jesus’ birth. Their pilgrimage, however, is often determined by political rather than religious considerations. When tensions are running high, Israeli security forces must frequently restrict Palestinian visitor permits.

Holy Week festivities in Jerusalem begin on Palm Sunday, one week before Easter Sunday, with a pilgrim procession from the Mount of Olives to the Old City.
According to tradition, the Palm Sunday procession follows the same path that Jesus took on his triumphant return to Jerusalem. Two thousands years ago, Jesus rode on a donkey as followers laid palm branches along his path. Today, pilgrims march on foot, waving palm fronds and olive branches.

On Good Friday, pilgrims retrace Jesus’ procession toward his crucifixion along the cobble stoned Via Dolorosa. This reenacted march along the Stations of the Cross features many of Jerusalem’s most historic Christian sites.

During the Via Dolorosa procession, pilgrims can be seen carrying large wooden crosses – some 15 feet tall – and reciting prayers at each of the fourteen Stations of the Cross.

Their procession begins at the Sanctuary of the Flagellation, where Jesus was scourged and judged, and ends at the Church of Holy Sepulcher, where Jesus was stripped of his garments, nailed to the cross and died.

The Eastern and Orthodox churches follow a different calendar than the Roman Catholic and Protestant churches, so their Easter is often as much as two weeks after the Gregorian calendar celebration.

This natural scheduling difference often helps reduce territorial tension in the Church of the Holy Sepulcher. The Church also gives each denomination its own space and separate schedules for permitted prayer times.

In 2007, however, the Christian calendars overlapped for the first time in four years, bringing all Christian pilgrims to the Holy City at the same time. Peace was maintained by tight scheduling of mass times and crowd control from Israeli police and local church leaders.